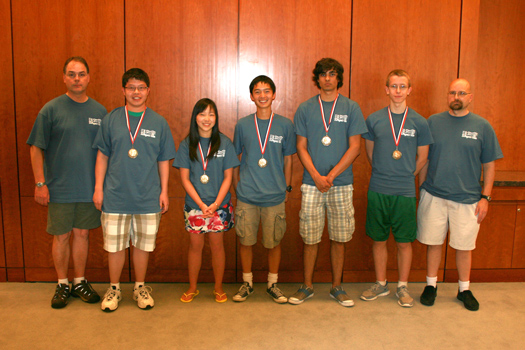 May 31, 2010, College Park, MD — Five students have been selected to represent the U.S. Physics Team as the 2011 Traveling Team at the 42nd International Physics Olympiad, a competition among high-school physics students, to be held in Bangkok, Thailand, from July 10 to 18.

"All twenty students who earned a position on the 2011 U.S. Physics Team are world class. They have tested themselves with the best of their peers for ten days and have proven to be an exceptional group of young people," said Beth Cunningham, Executive Officer of the American Association of Physics Teachers, which sponsors the team. "We are proud of them all and are confident that the five Traveling Team members will continue the tradition of success for the United States as they represent the U.S. Physics Team in Bangkok."

The students attended a rigorous training camp at the University of Maryland, where, through classes, labs and special lectures, they were coached on difficult physics concepts,  and then took a series of exams. They also made a trip to nearby Washington, DC to visit their congressional representatives and senators, and meet with Carl Weiman at the White House Conference Center. The coaches for the 2011 U.S. Physics team are: Paul Stanley, Academic Director/Senior Coach, Warren Turner, Senior Coach/Lab Coach, Andrew Lin, Jia Jia Dong, Quizi Li, David Fallest, and Marianna Mao, Junior Coach.

The 42nd IPhO is being hosted by Thailand with the generous support of the Royal Thai Government and the POSN (The Promotion of Academic Olympiad and Development of Science Education Foundation).  The nine-day international competition brings together pre-university students from more than 80 nations.

• The official website of the International Physics Olympiad:  http://www.ipho2011.org/home
• Screening exams the students took to place on the U.S. Physics Team: http://www.compadre.org/psrc/evals/olympiad.cfm