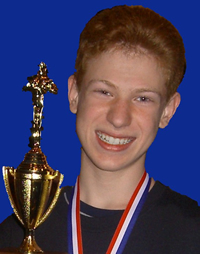 Hi. I am Eric Schneider, age 15, and have been involved with all types of competitions my entire life. Starting at age 3, I enrolled in a martial arts school and trained for many years, culminating in my earning two Black Belt degrees. During my elementary and middle school years, I continued to be an avid athlete, earning first place trophies at tennis tournaments and playing center midfielder on several championship soccer teams. I also won various awards on my school's fencing and squash teams, and enjoyed skiing, particularly in Vermont, as I continue to do today. In addition to sports, I also entered and won my school's spelling bee, several art contests, and also earned an award at my school's "forensics" competition (which involved performing lengthy monologues - not debate). Furthermore, I auditioned and performed in several local theater productions and was offered a contract by a talent agency. Thus, I am no stranger to competition.

But just what does my background have to do with Olympiad Competitions such as the Physics, Mathematics, and Computing Olympiads in which I've been involved? I believe a common thread shared by each of my activities is that while most involve some sort of physical involvement or creativity, all involve a strong mental component. Tennis, soccer, fencing, squash, and martial arts are all activities for which developing the right strategy and focus can win over mere strength and physical skill. Involvement in the spelling bee, forensics, acting, and art all relied heavily on my using my brain to memorize and/or synthesize new material. But what if there existed an activity that involved strong mental skills, keen focus, creativity, was challenging, competitive, fun, and which I could participate in as both an individual and as a team? Luckily, I found just that in the form of math and science contests in which I have competed for the past five years. Although I didn't enter my first math contest until 6th grade, the seeds of preparation and interest started much earlier. At age five, I would search online for brainteasers or any problems involving numbers and ask my parents, who are not mathematicians, to help me find more challenging ones as I advanced. It was during one of these searches that my mom and I discovered the first contest for students my age. I am proud to share that I won this contest and this taste of success inspired me to continue to work diligently and seek more challenging competitions.

Although local and state contests are often fun and exciting, I think the pinnacle of all of these contests are the United States Olympiads, including the United States Physics Olympiad, for which I am extremely proud to be part of its team. However, I would not have been able to reach this level of achievement without the support and encouragement of my parents and grandparents, as well as all of my friends who constantly cheer me on. I wish to thank each and every person who has offered their support along my journey, and I will do my best to make you and the United States proud!