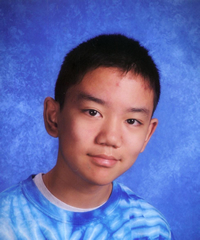 I was born in Houston, Texas, and I have lived in its largest suburb, Sugar Land, since. The beginning of my pursuit of academic excellence was perhaps one afternoon, when I was 5. One afternoon, I had so strongly convinced myself that 314... (A number that I've since forgotten) times itself would start out 90116..., until I consulted my dad. That afternoon, I learned how to add, subtract, multiply, and divide numbers so large that I could not yet name them!

In Middle School, I met the future Physics finalist Kevin Y. Chen and the coach at our school, among the most hardworking teachers in the nation, Jeff Boyd. I was amazed and inspired by Kevin's success, as was he by his predecessor, Mark Zhang. While I never saw him much in school, I was fortunate enough to qualify for the Texas MATHCOUNTS team with him and win the first place team award for Texas.

I took my first Physics class this year. I have learned a lot from my teacher, Mrs. Matney, and I enjoy her class, with her allusions to Calculus and her demonstrations, my favorite of which are the demonstrations of sounds and resonance. I would like to thank her, all of my teachers throughout life, and various online resources in helping me to qualify for the training camp.

I was very excited to read my invitation, and even more so when I heard much about the entertaining people who have also qualified for the camp, a few of which I have met before in person, and all of which I am excited to meet in May. The extent to which I am acquainted with the other finalists belies my introversion. I may sometimes have sharp opinions (such as my aversive feelings toward driving), and at other times, they are contradictory. To some degree, I am fond of the manner in which Shakespeare writes, and I take interest in the recent developments in Biology that could affect human lives in the years to come.

The author Amy Tan, in "Mother Tongue," wrote of her affinity toward math and science, "Math is precise. There is only one answer." One only needs to find a list of proofs of the Pythagorean Theorem to see why this is not true! Tan's statement, while seemingly true, does not describe how I feel. The empirical and theoretical derivation of all current knowledge in science is what most appeals to me. It is the basis of my passion in this subject of which I hope to learn much more when I venture to Maryland.