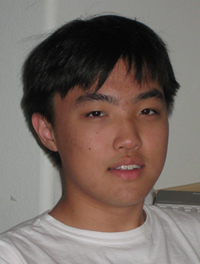 On a sleepy day when I was five, I decided that I was bored beating up elite fours in Pokémon. Hence, I started writing numbers in a search for the largest one. After about an hour, I reached the number 1000 and I gave up my search and asked my parents what was the largest number. They were busy, but they quickly told me that it was "infinity." After thinking about this for a minute, I told my parents that I discovered a new largest number, "infinity plus one." Ever since this, my mom knew that I had good number sense.

My elementary education started at Seoul Foreign School then moved back to the states where I attended the Mirman School from 5th to 7th grade. In 7th grade, the school hired Professor Jhunjhunwala to teach me calculus. I was glad to finally be in a "class" where I did not know what I was being "taught."The material he taught me was challenging. On my first test on limits, I got a 40%! The problems were not just straightforward regurgitations of formulae and concepts, but instead I needed to use the formulae and concepts in what seemed to me to be brilliant and convoluted fashion to solve the problems. It felt essentially like a giant abstract jigsaw puzzle. After a year of his class, I walked away with a much better mathematical understanding and more sophisticated problem solving skills. What had seemed so alien earlier in the year had fallen into place. After 7th grade at the Mirman School, I began homeschooling while taking classes at UCLA. At UCLA, in the fall of 2008, I took my first physics class where I began to see the beauty of physics. I was fascinated by how physics provided explanations for how things worked. I immediately fell in love with this astounding new subject because of how it worked harmoniously with math due to its ability to predict the movements and interactions of objects with each other in real life. I have continued studying physics for the last two years and been learning how physics can explain life from electrical circuits, to the cosmos, and nuclear bombs. Now, I am grateful to be a part of the US Physics team to experience physics beyond what I have learned.

In the fall, I will be attending the Massachusetts Institute of Technology as a freshman. I plan to major in Math and Physics.

I would also like to thank my mom for her support over the past fifteen years and also my little brother for making life more enjoyable. In addition, thank you to my math coach, Ali Gurel, for supporting and teaching me incredible problem solving skills. Thank you to Dr. Jhunjhunwala and thanks to Larry Wiener who has been not only a great teacher but a friend. Last but not least, thanks to all my UCLA professors, especially Professor Olga Radko, and teachers throughout the years.