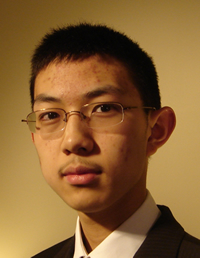 From the beginning of my schooling, I have always been very competitive in mathematics. I spent a lot of time studying math and was fairly successful, obtaining a perfect score in the MOEMS contest, 7th place the MATHCOUNTS state competition, and nearly qualifying for the USAMO. Even so, I never enjoyed math or understood its significance very well, seeing it as a collection of poorly conceived word problems involving magically transforming luggage bins and strange tournament rules, as well as cryptic, long formulas with little connection to reality.

I got my first experience in physics when, in my freshman year, my dad brought home the Feynman Lectures on Physics series. The learning curve on Feynman's lectures was a bit too steep for me to read much farther than the first few chapters, but the way that the formulas and concepts were explained from a very fundamental starting point and related to physical situations got me hooked on physics. Not long afterwards, I began to seriously study physics from Halliday Resnick. Though pushing through pages of terse, verbose text filled with calculus was difficult, especially since my knowledge of calculus came exclusively from that same text, when I finished that chapter and its exercises, the subject in question seemed simple, and I would question how I felt such difficulty only a short time earlier. Of course, I would be brought back to reality by the next chapter, where I would be confronted by more pages of confusing calculus and cryptically worded explanations.

In my next year, I took Physics B and Calculus BC. Physics was mostly uneventful, but calculus was one of the most exciting classes that I have taken. Calculus was a fairly simple, but extremely powerful mathematical tool. I spent countless hours integrating volumes and areas just because I could. Though not extremely important to my studies in physics then, calculus became essential in E&M, and when I began to study more advanced textbooks, such as those by A.P. French, and Feynman's lectures.

When January came around, I was ready to take on the F=ma exam. I readied my pens, calculator, and ream of printer paper as I prayed that the computer wouldn't crash while I was taking the test. After 75 minutes, I thought over the train wreck of a test I produced. There was one huge problem that really hurt my score; I squandered most of my time on the elastic collisions before realizing that they had to be solved using a center-of-mass reference frame, a topic covered in depth by my textbook, but skimmed by me because I thought I knew it. Amazingly, my score was good enough to qualify for the semifinal competition. The next few months were marked by a furious rush to learn E&M, while also rigorously reviewing what I already covered. It was not enough that time and I did not pass the semifinal, but I became determined to be ready for anything the coming year. For the next 12 months, I studied hard in the rest of the topics while improving my existing knowledge in mechanics. My hard work paid off and I qualified for the US Physics Team.