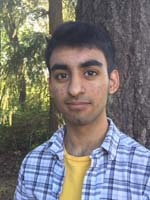 I think I’ve always had the mentality of someone interested in physics, though for most of my life I didn’t realize it.

At first, like any kid, I wanted to learn everything I could about the world. But I’m pretty sure I took it further than most; soon after I learned to read, my favorite pastime became reading various encyclopedias cover to cover.

Once in school, my favorite subject was always science. It didn’t matter that it was a different field every year; nothing could as consistently interest me as learning every detail about the universe. And I wasn’t afraid to push my interest beyond mundane phenomena; in 4th grade, everyone had to work on a major research project on a topic of their choosing, and I did mine on the various possibilities for relativistic time travel. In 7th grade, I had my first physics class, but the lack of much mathematical complexity made it seem little different from any other science.

However, in 10th grade, I was reintroduced to physics, this time with plenty of quantitative exploration of a multitude of phenomena. For whatever reason, I was the kid who was “good at physics” before I actually made the conscious decision, or even realization, that I was interested in it. Physics seemed to be universally regarded as being exceptionally difficult, and most of my classmates would struggle with it; more and more, they would invariably ask me for help. For the first time, I had some sort of reputation for something. In retrospect, it seems that society decided physics was my thing before I did. But even if I was initially pushed further into the field more by my enjoyment of helping my peers than my interest in the field itself, that’s not to say I didn’t find it interesting.

I’ve realized that my enjoyment of quantitative, mathematical problem solving, and desire to understand the universe in detail, both things that have been with me my whole life, have made physics the most naturally enjoyable pursuit I can think of. In fact, looking back, it seems quite possible that some of what I thought of as a natural aptitude for it was actually just a natural interest, which subconsciously made me more intent on understanding it.

I had no plans to be on the US Physics Team. I took the F = ma test without much prep, just wanting to try my hand at what looked to be a fun challenge; I was lucky enough to qualify for the USAPhO exam, and, realizing that I had real potential, made my best effort, still not expecting to make it to a team I hadn’t even heard of for long before I took the qualifier. I’m excited that I apparently underestimated myself and am now one of the foremost physics students in the nation, but I’m even more excited for where this could take me—I look forward to learning as much as I can at camp in two weeks!

For the past year and a half, I’ve been hooked on physics—it’s interesting, it’s challenging, it’s enjoyable, I’m apparently pretty good at it—I still haven’t made the conscious decision about whether studying it will be my choice of career, but I’m not sure how I’d be able to stop.