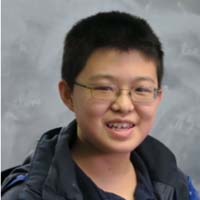 There has been an issue that has bothered me since elementary school, which is the existence of free will. Sure, it seems to exist, but does it? I would conjure up endless thought experiments of giant acrylic slabs with people-shaped holes on the sidewalk, with passerby walking through them without thought. Surely, if free will didn't actually exist, it would be theoretically possible to fashion these blocks by predicting exactly where every person would step. In 6th grade, I would learn basic (read: no math) quantum mechanics, which showed that randomness was inherently existent in the universe. This answer never seemed to satisfy me; after all, doesn't your consciousness seem like more than a bunch of neural signals? Perhaps philosophy and physics should not mix.

The first steps in making camp came as a result of early successes in math competitions. In 4th grade I became interested in the Math Olympiad program at my school. However then my progress inched forward at an undetectable pace. In 6th grade I discovered the AMCs and Mathcounts. These competitions provided me with a kind of milepost towards which to aim, regardless of distance. A great breakthrough came in 7th grade when I was invited to the Mathcounts National Competition, meeting many who I would subsequently often see. I also went on to win an Honorable Mention at the USAJMO (USA Junior Math Olympiad). Compared to then, the two past years have been generally anticlimactic.

My interest in physics itself didn't manifest itself until the beginning of this year. At the first Physics Team meeting of the year, I, not confident in my abilities, attended the section intended for incoming freshman. However, I quickly realized my mistake after doing a few 1-D motion problems, and was invited to join the other section, which assumed knowledge of calculus and basic physics. These lectures were totally incomprehensible. Although I somewhat understood the concepts that were being used, but why they were being used and how the setup was correct was a total mystery. This happened for three consecutive weeks until I finally resolved to actually learn what was being taught. So now I had a new status quo. Every Tuesday I would soak up as much physics as I could bear, and then look up the rest on Wikipedia and try to understand it.

Although I didn’t realize it at the time, I was gradually becoming able to wade through more and more of the lectures. By the time F = ma came along, USAPhO qualification seemed to be guaranteed. But then the road would end. This year the camp invitation was a total surprise. Making camp was inconceivable at the beginning of the year, but somehow occurred anyway. It called into question all of my summer plans, not to mention missing school.

When all the dust settled, I was still left with one gnawing question. The process of making camp clashed with my understanding of how life worked. Was this arrangement purely the result of my hard work and luck? Or was it already predetermined, and all I had to do was to move forward in time, having no real free will? But does it really matter in the end? Either way, I am excited.