Portland is the 28th largest metropolitan area in the country, the fourth largest city on the West Coast, and the largest city in Oregon. — www.portlandalliance.com 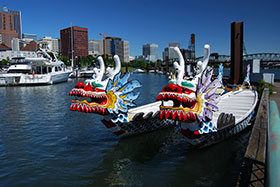 Portland International Airport (PDX), located just 20 minutes from downtown has direct connections to major airport hubs throughout the United States, plus non-stop international flights to Canada, Japan, Mexico, and the Netherlands. It is also a hub for flights to smaller cities in Oregon, Washington, Idaho, California and Nevada. The airport is a major hub for Alaska Airlines and Horizon Air.

Avis is offering a special discount to AAPT Summer meeting attendees. Call Avis directly at 800-331-1600 and use the Avis Worldwide Discount (AWD) Number J945158. You can also make a reservation on the the Avis website.

The four MAX Light Rail lines make getting around certain parts of the city extremely simple. Each line has a color designation, and all four connect with downtown Portland. The Yellow line stretches to the Expo Center, the Red line goes back and forth from the Portland airport, and the blue line runs all the way from Gresham out to Hillsboro. The Green line runs between Clackams Town Center and PSU. Many MAX stops have displays telling you when the next train will arrive, and each station has ticket machines for you to buy your tickets in advance (you can’t buy them on the trains).  Learn about the MAX Light Rail.

In addition to TriMet’s services, there’s also the Portland Streetcar which is maintained by the city and which connects downtown Portland with NW Portland, the Pearl District, South Waterfront and Portland State University. Learn more about the Streetcar.