Virtual commercial workshops were held on Friday, January 7 and Saturday, January 8 with selections ranging from “Teaching a Diverse History of Physics” to “Moments of Inertia and Angular Momentul Experiments with Video Analysis.” Commercial Workshops were hosted by AIP and Vernier. 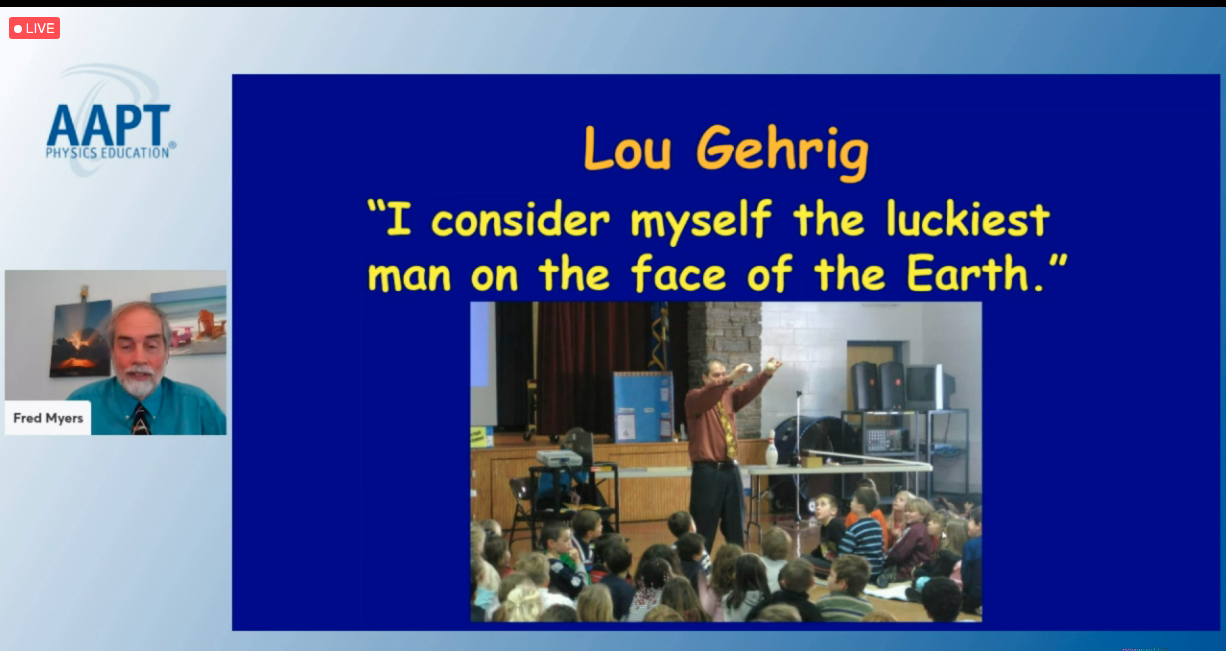 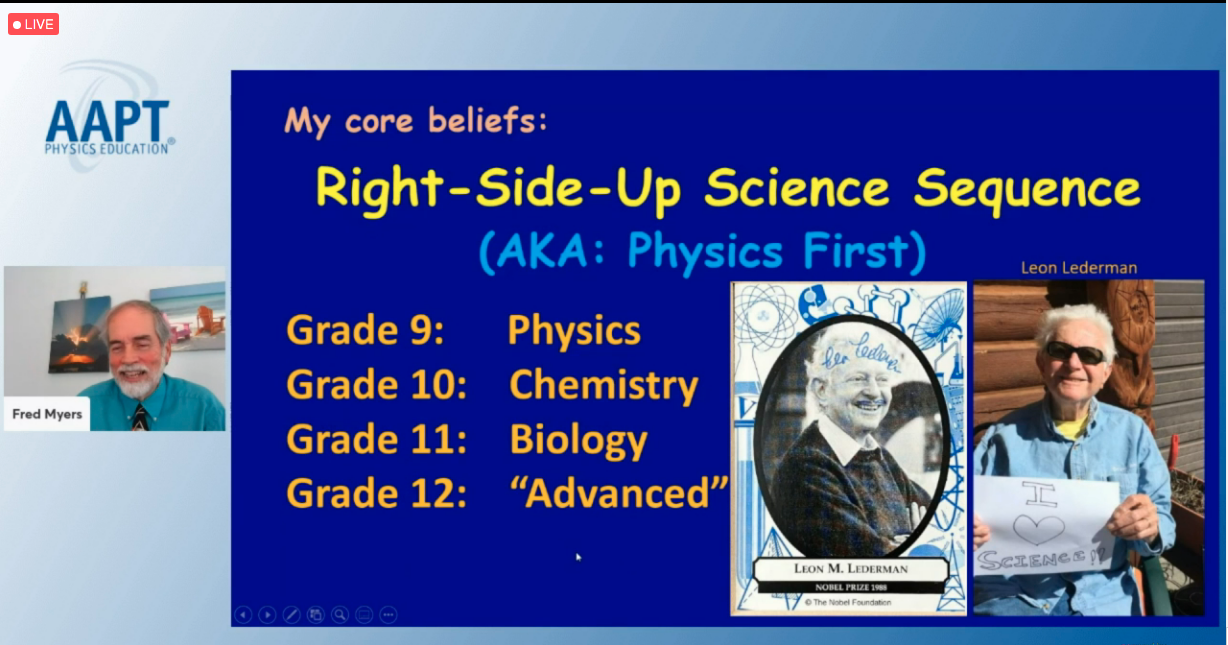 Fred Myers, Lead Subject Matter Expert for Great Minds, an innovative K-12 publishing company. Fred was in public and independent schools for 42 years before “retiring”. He taught physics for 33 years in a wide variety of high schools: Freeport H.S. (Freeport, NY), Choate Rosemary Hall (Wallingford, CT), Greenwich H.S. (Greenwich, CT), and Farmington H.S. (Farmington, CT) where he also served as Science Department Chair. During his last 9 years as a formal educator he served as Director of Science, an administrative position in Glastonbury Public Schools (Glastonbury, CT). His talk, Physics for All: Wonder, Magnificence, and Joy focused on the need for Physics educators to strive to reach a far greater percentage of the populous. A wider appreciation and understanding of the laws of physics will help produce a better, more informed citizenry. It behooves physics educators to develop and implement introductory physics courses that are relevant, interesting, inspiring, and joyful … all while setting high expectations for achievement. He noted that veryone experiences physics in their everyday lives during childhood (from motion to magnets) and begins developing concepts about them. Sadly, only a very low percentage of humans enroll in a formalized physics course during their schooling, and an astonishingly low percentage enroll in a second physics course. Physics educators at all levels should strive to make a student’s first physics course engaging, interesting, challenging, and fun. Physics is for everyone and should not be treated as an elite course that is reserved for the best and the brightest students. A first-rate introductory course should challenge students’ minds and open their eyes to the magnificence of physics, and leave the students desirous of learning more physics. 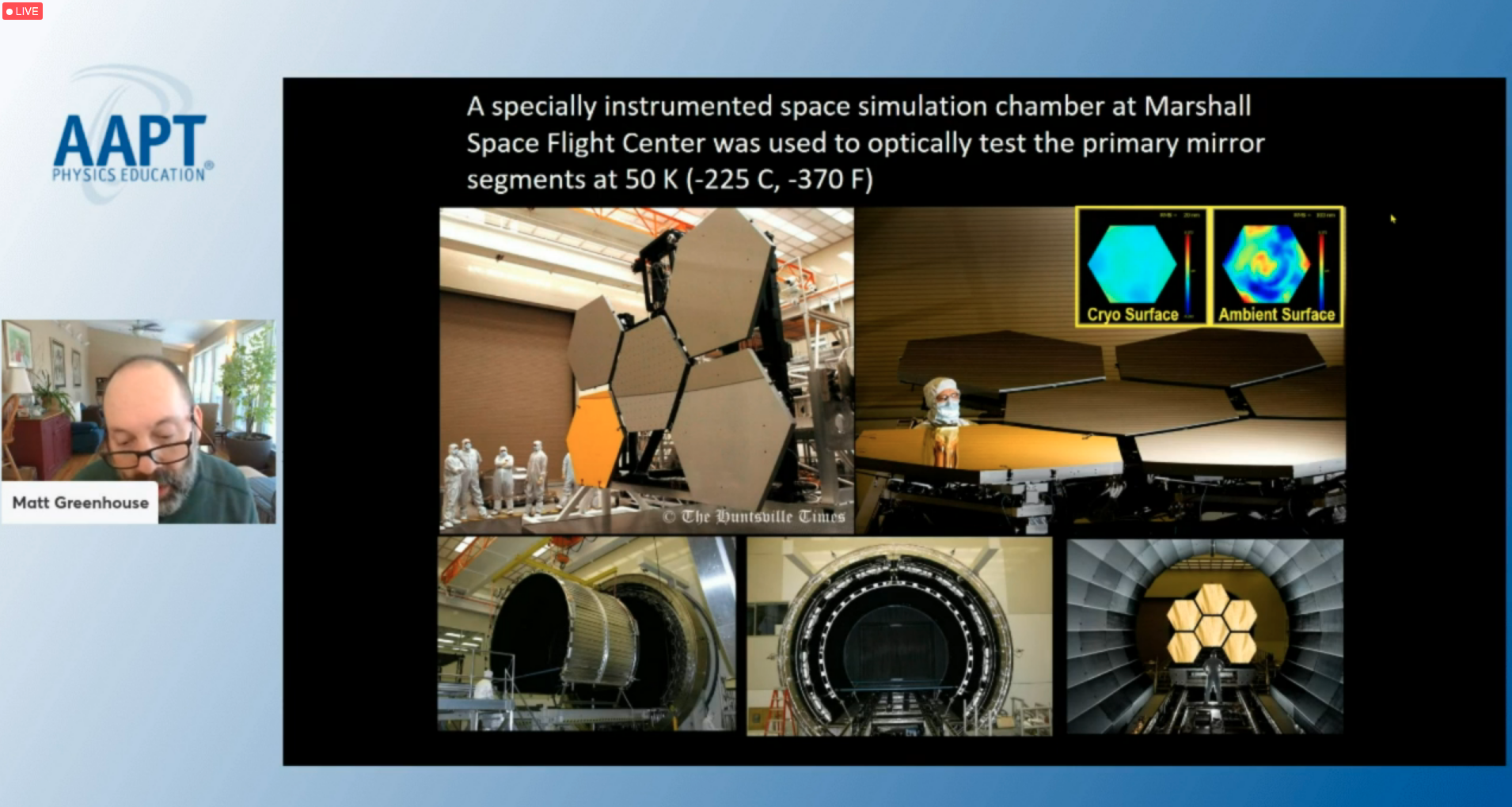 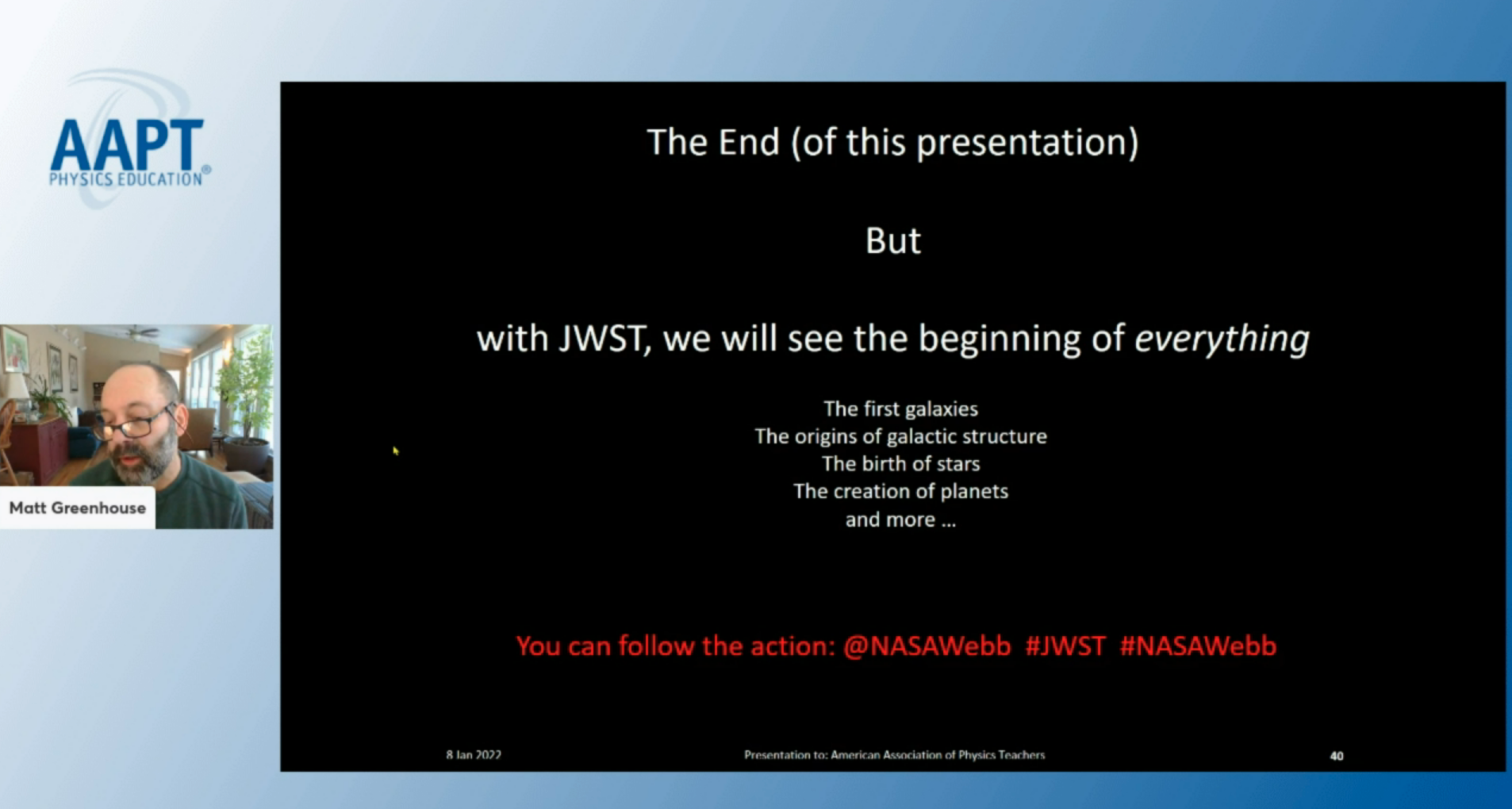 Matthew Greenhouse has served on the James Webb Space Telescope (JWST) senior staff as Project Scientist for the Webb science instrument payload since 1997. He specializes in infrared imaging spectroscopy, development of related instrumentation and technologies, flight project science, and technical management. He spoke about The James Webb Telescope. The JWST is the successor to the Hubble Space Telescope. It is the largest space telescope ever constructed, and will extend humanities’ high definition view of the universe into the infrared spectrum. The Webb will observe early epochs of the universe that the Hubble cannot see to reveal how its galaxies and structure have evolved over cosmic time. The Webb will explore how stars and planetary systems form and evolve and will search exoplanet atmospheres for evidence of life. The Webb’s science instrument payload includes four sensor systems that provide imagery, coronagraphy, and spectroscopy over the near and mid-infrared spectrum. The JWST is being developed by NASA, in partnership with the European and Canadian Space Agencies, with science observations proposed by the international astronomical community in a manner similar to the Hubble. The Webb launched on Christmas Day, 2021. 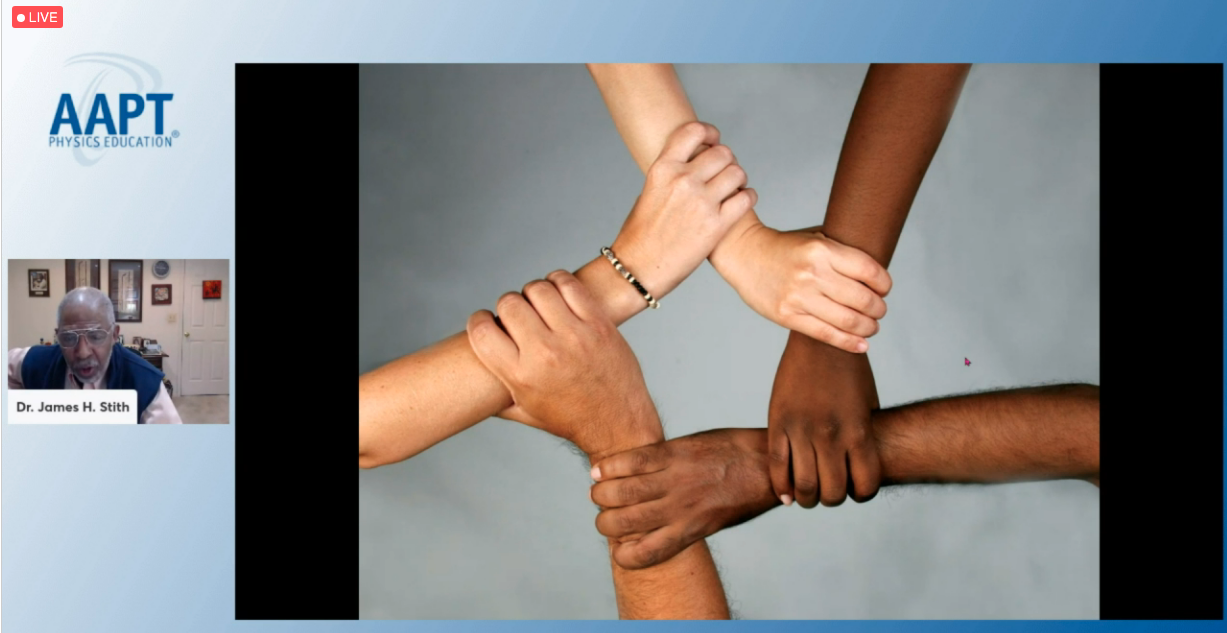 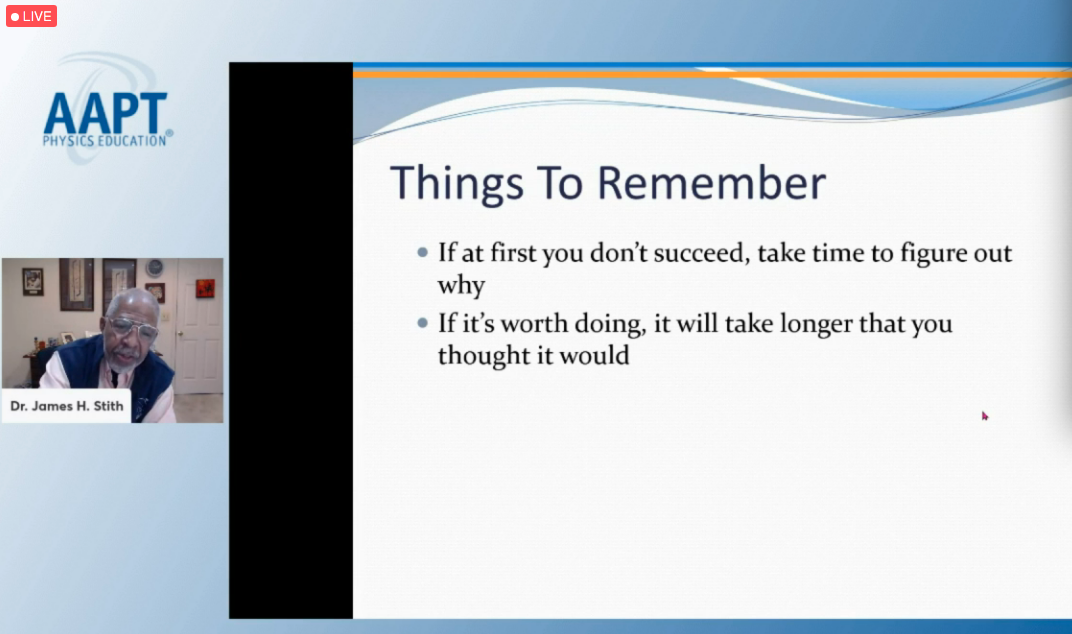 James H. Stith is a former president of the American Association of Physics Teachers (AAPT) and Vice President Emeritus of the American Institute of Physics (AIP). Throughout his career, he has been an advocate for programs that ensure ethnic and gender diversity in the sciences. As Vice President, he had oversight of a broad portfolio of units which included the Magazine Division, the Media and Government Relations Division, the Education Division, the Center for the History of Physics, the Statistical Research Division, and the Careers Division, all of which provided day to day support of AIP Member Societies. In his talk, Diversity, Equity, and Inclusion: An Elusive Goal? he noted that the quest to achieve ethnic and gender equity in physics has been a goal for at least the past fifty years. Despite the resolute and well-intended efforts of so many people and organizations, parity has alluded us. While there has been success in raising the numbers of African Americans in the field, we have lost ground in terms of overall representation. We were elated to see significant increases in percentages of women earning degrees, rising from single digits to just above twenty percent; but those numbers have plateaued well short of parity. It is encouraging to see the steady increase in the Latinx representation as we mine those numbers extracting the lessons learned that might be adapted in a broader context. While there is a compelling argument for the need to address the broad underrepresentation in physics, this talk focused on the underrepresentation of African Americans in the discipline. His journey began in 1964 at Virginia State College as an instructor in an NSF sponsored program to improve the science education of K-12 teachers. His thinking about solutions in over fifty years of active engagement has evolved from believing “It’s just the science” to recognition of the need for a more comprehensive approach. This talk revisited that fifty-plus year journey by focusing on key issues. Among these: Are we asking the right questions? Are we solving the right problem? What is our definition of success?

Member service to AAPT was recognized with the announcement of the Homer L. Dodge Citations for Distinguished Service to AAPT to Arlisa Richardson, Dimitri Dounas-Frazer, Dave McCachren, and Steve Henning.

Bree Barnett Dreyfuss of Pleasanton, CA was recognized as an AAPT Fellow.

Meeting of the Members 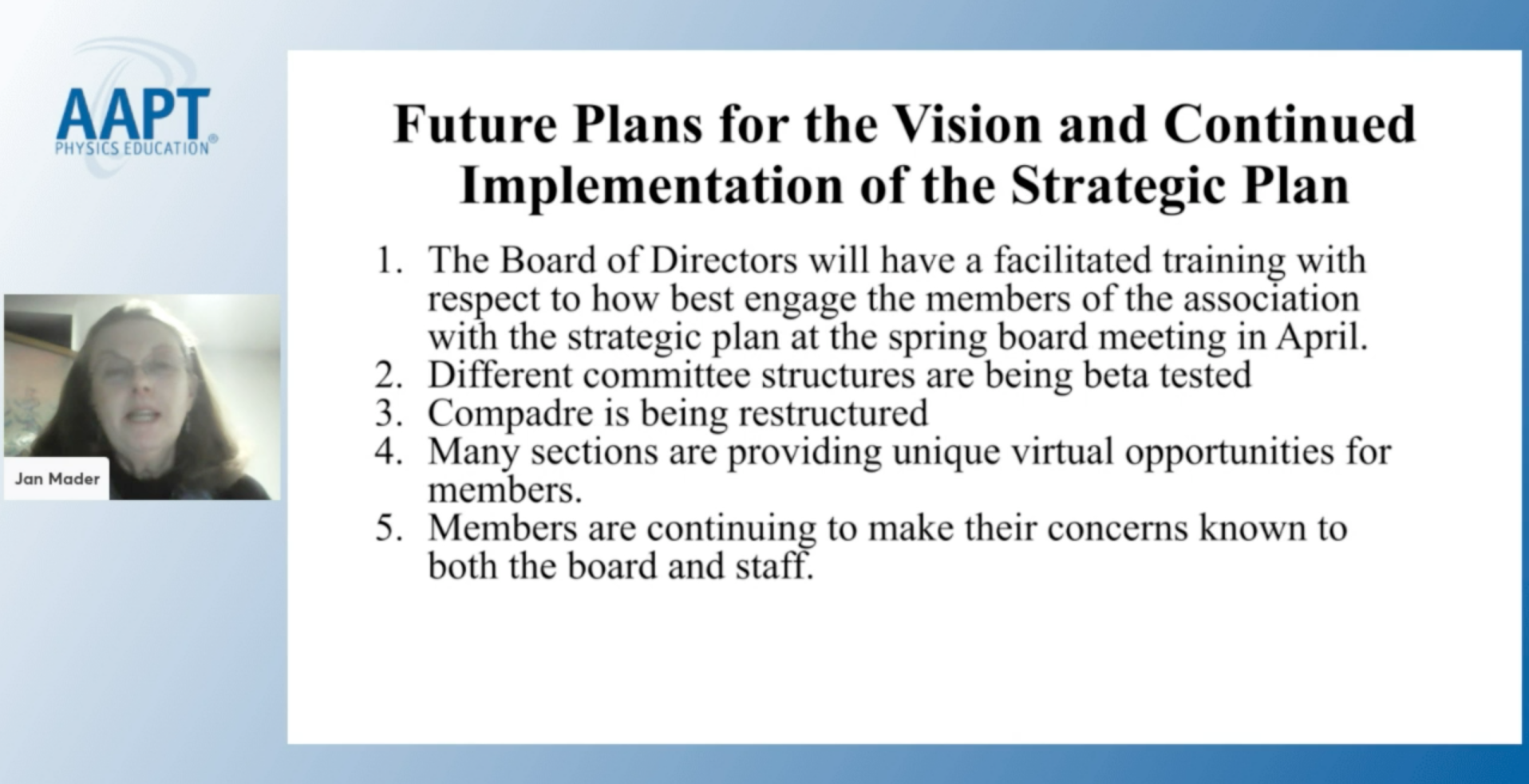 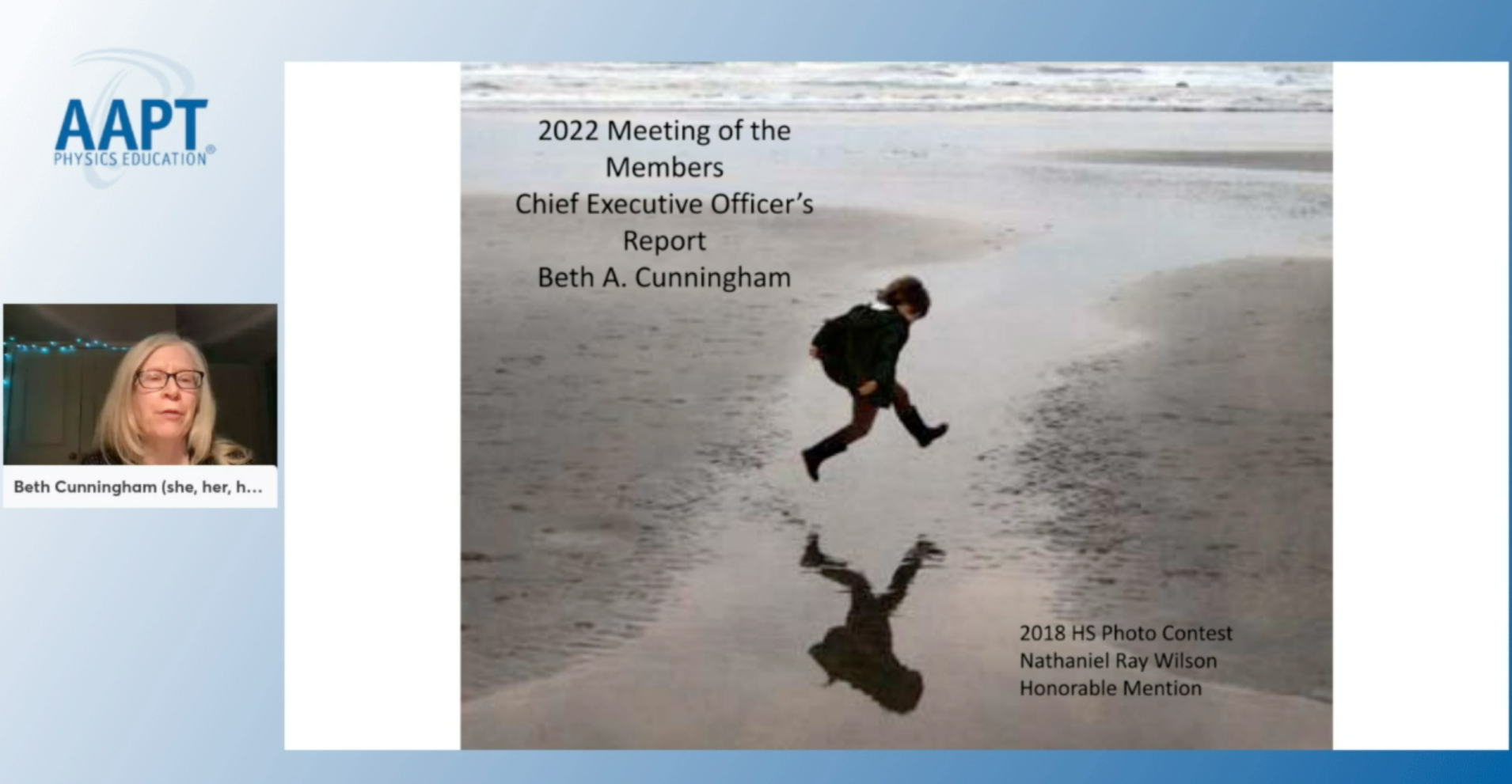 The annual Meeting of the Members agenda included updates on the state of AAPT, progress on the Strategic Plan, future meetings, and the association's budget. The Committees on Diversity in Physics and Laboratories were recognized as 2021 Area Co-Committees of the Year. Members were informed about new Diversity, Equity, and Inclusion initiatives and the AAPT Statement regarding concerns about the naming of the space telescope called JWST. 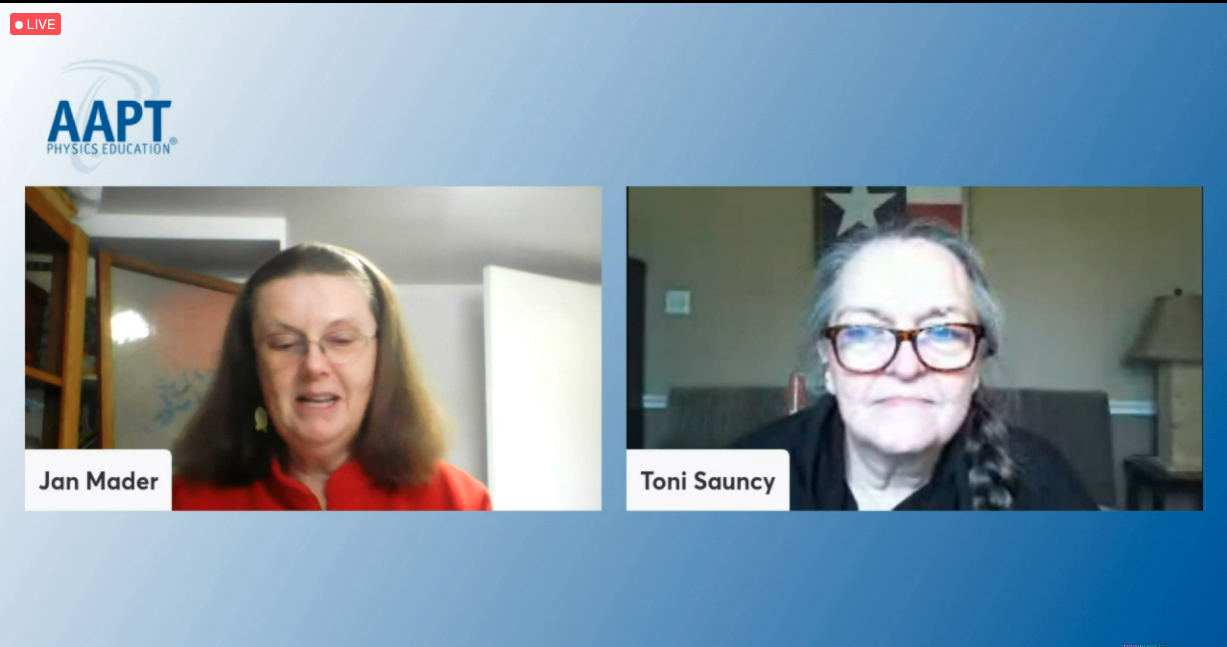 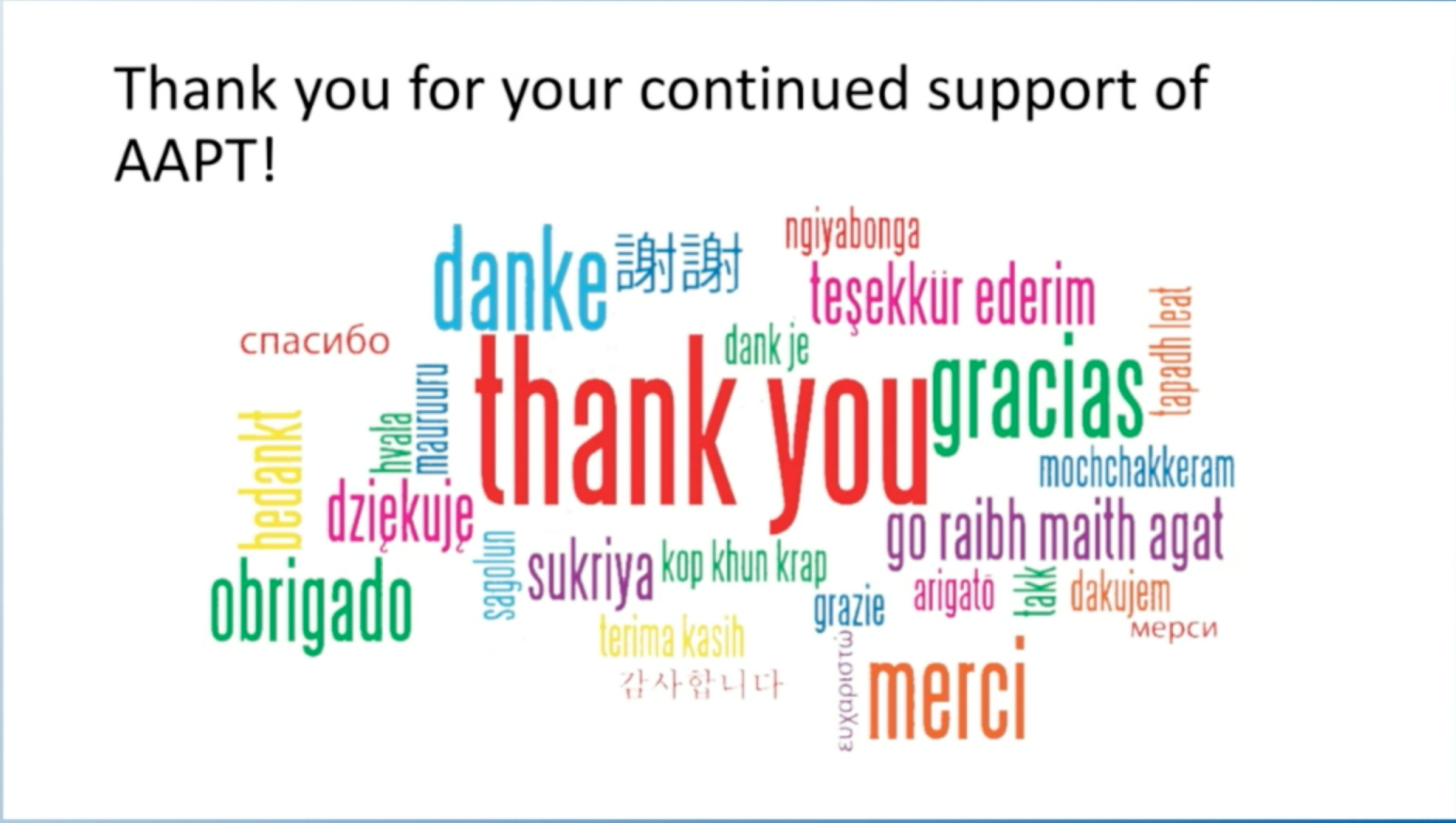