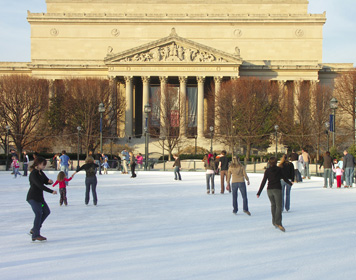 In 2008, the U.S. Census Bureau estimated the District's population at 591,833 residents continuing a trend of population growth in the city since the 2000 Census, which recorded 572,059 residents. During the workweek, however, the number of commuters from the suburbs into the city swells the District's population by an estimated 71.8% in 2005, to a daytime population of over one million people. The Washington Metropolitan Area, which includes the surrounding counties in Maryland and Virginia, is the ninth-largest in the United States with more than five million residents. When combined with Baltimore and its suburbs, the Baltimore-Washington Metropolitan Area has a population exceeding eight million residents, the fourth-largest in the country.

The average temperature in the Washington, DC area in February is a low of 26 degrees and high of 47 degrees. See the forecast on Weather.com

There is so much to see in Washington DC.  Take a guided tour of the nation’s capital and enjoy our national treasures.   Please see the following websites for more information: