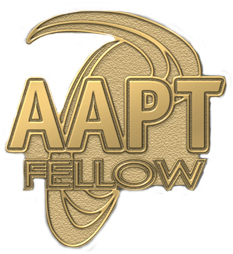 In January 2014 the AAPT Executive Board approved a motion to create the AAPT Fellow award.

At the inauguration of the Fellowship program, all previous award winners (other than Klopsteg and Richtmyer awardees) who are current members of AAPT and have been members for the last seven years were automatically made Fellows. Inaugural fellows were recognized collectively at 2014 Summer Meeting.

The criterion for selection of Fellows is exceptional contribution to the mission of the AAPT to enhance the understanding and appreciation of physics through teaching. Fellowship is a distinct honor signifying recognition by one's professional peers.

Any AAPT member who has maintained an active membership for at least seven years is eligible for nomination for Fellowship. Nominations for Fellowships must include at least two letters of recommendation from active AAPT members, as well as documentation of contributions at the national or section level, as well as a current CV.

Any Fellow who does not renew her/his AAPT membership will be sent a reminder letter and given a grace period of one year to renew before fellowship status is rescinded.

Awards will be presented at the national meeting and announced in The Physics Teacher, American Journal of Physics, and on this web site.