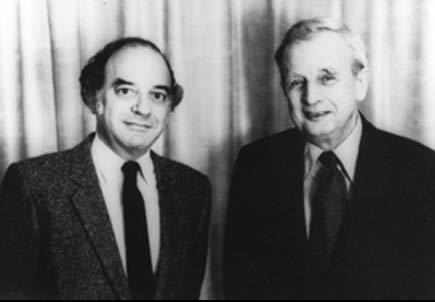 Established as the Excellence in Undergraduate Teaching Award in 1993; renamed and substantially endowed in 2010 by John Wiley and Sons.
Named for David Halliday and Robert Resnick, authors of a very successful college-level textbook in introductory physics, and funded since 2010 primarily by a generous endowment from John Wiley and Sons, the publisher of that textbook, the David Halliday and Robert Resnick Award for Excellence in Undergraduate Physics Teaching recognizes outstanding achievement in teaching undergraduate physics, which may include the use of innovative teaching methods.  The recipient, an AAPT member for whom undergraduate teaching is a primary responsibility, delivers an address at an AAPT Summer Meeting and receives a monetary award, an Award Certificate, a copy of the citation, and travel expenses to the meeting. Previous winners of the Oersted Medal or the Robert A. Millikan Medal are not eligible for this award.   Self-nomination is not appropriate for this award.

Cindy Schwarz, Vassar College, Poughkeepsie, NY
"What Can We Do In The Subatomic Zoo?"

Dwain Desbien, Estrella Mountain Community College, Avondale, AZ
"Introductory Physics: What We Teach, How We Teach It, and What We Should Be Doing!"

Michael Jackson, Central Washington University, Ellensburg, WA
"Teaching Physics and Its Role in the survival (and growth) of a Physics Program"

Kevin M. Lee, University of Nebraska-Lincoln Center for Science, Mathematics, and Computer education and the Department of Physics and Astronomy

Mario Belloni, Davidson College, Davidson, NC
"Using Technology to Increase Student Engagement Inside and Outside of the Classroom"

Corinne Manogue, Oregon State University, Corvallis, OR
"The View From the Other Side of the Mountains: Exploring the Middle Division"