A Standing Wave by Jaime Mathew 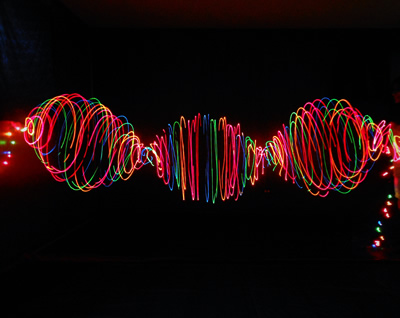 This photo illustrates a standing wave created by quickly spinning a string of Christmas lights. A standing wave can appear when the medium is confined by making both ends immovable. They are formed when two waves travel in opposite directions and interfere with each other. By spinning the lights at one end, a new harmonic wave is continuously introduced, which travels to the end that is taped to a wall. Once reaching the wall, the wave will then reflect backward, and travel back to the origin. Since the lights are oscillating in place, the waves traveling in opposite directions will be of almost equal wavelength and amplitude. When the two waves have a displacement in the opposite direction, a destructive interference is created and they cancel each other out. These points of no movement in the string are called nodes. On the other hand, a constructive interference occurs when the two waves have a displacement in the same direction and they create an antinode. Antinodes are where the wave is at a maximum displacement and amplitude and can be seen by the circular path of the lights. This standing wave has four nodes, which includes the fixed endpoints, and three antinodes.