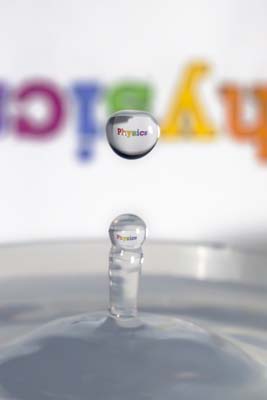 This photo is of a small container of water the moment after a droplet hit its surface, causing another droplet to be ejected upwards along with a column of water. Both the droplet and the top of the column are roughly spherical in shape and are positioned so that the word 'Physics' (which is flipped upside down) is farther away than twice their focal distances. What results is a tiny image of the word 'Physics' appearing at the droplet and column of water. This illustrates how, when dealing with converging lenses, an object that is positioned farther away than two times its focus creates an image that is both smaller than the object and inverted.