Stick or Slick: A Cold Conundrum by Aaron Michael Hoorn 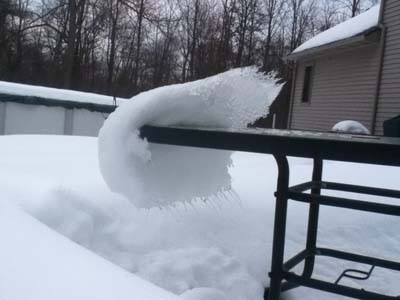 The snow formed this shape due to the force of gravity on the snow, and the wind pushing the snow towards the edge of the table. The table that the snow rests on is angled downward toward the snow, thus gravity allowed the snow to gradually slide toward the edge, and then, the wind pushed the snow into its curved shape. The snow can maintain its shape and position because of the forces between the molecules of snow, and the table are stronger than the force of gravity on the snow. The forces are even stronger after the temperature gets lower, and the snow forms ice. These forces are the intermolecular forces, hydrogen bonding, between the hydrogen and oxygen atoms within the snow. The structure of snow and ice, makes it possible to form many hydrogen bonds within each molecule of snow and with other nearby molecules of snow. These strong forces with the snow make it capable of keeping its unique structure. The forces of adhesion with the table are very strong, due to the hydrogen bonds with the table and overcome the forces of gravity acting upon the snow, thus it remains on the edge of the table. Also, to stay on the table, the edge of the table is acting as a fulcrum point for the snow, so the mass on either side of the table could be similar, allowing this one of a kind structure to stay intact on the table.