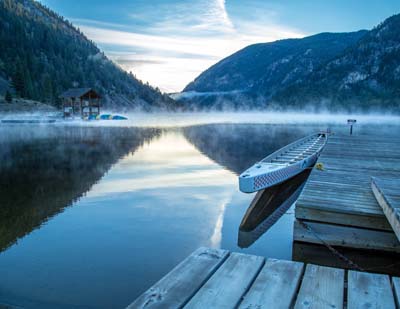 The awe-inspiring scene of steam rising off a serene lake early in the morning is a beautiful sight, one that owes its appearance to a physical phenomenon that happens in the fall known as steam fog or evaporation fog. The high heat capacity of water causes the lake to lose less heat overnight than the land around it. On clear nights, the cooler land chills the air around it. In the morning, as water evaporates from the surface of the lake, it condensates upon contact with the cool air above, forming tiny droplets of water. These tiny droplets of water constitute the fog, which appears similar to steam rising off the water, hence the name “steam fog”. This phenomenon occurs during the autumn because the lake is relatively warmer from retaining more summer heat than the land and air around it. In the spring, the lake is colder from the winter chill, and since water is slow to warm just like it is slow to cool, the lake ends up being colder than the air above it, which causes a different type of fog––advection fog.