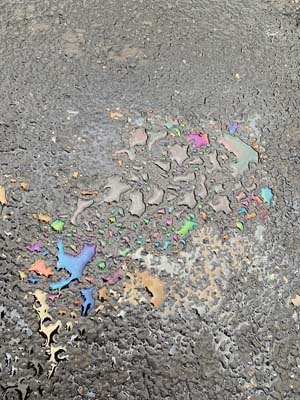 This photograph displays of multiple droplets of oil reflecting off different colors. This photograph represents the concept in physics called Thin-Film Interference. As shown in the photograph natural light is shining on a road with droplets of oil, reflecting and producing a nice variations of different colors. Thin-Film interference is caused by some light being reflected at the air/oil and some being transmitted into the thin film oil. As the transmitted portion encounters another medium change when it gets to the oil/water interface. Then this wave is partly reflected and partly transmitted to the pavement below. When taking the picture, at angle will reflect a different color of light compared looking at another angle, this concept is called iridescence. Iridescence is cause by light waves interfering with one another, therefore we see different colors at different angles due to iridescence.