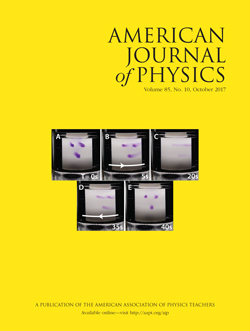 Unmixing demonstration with a twist: A photochromic Taylor-Couette device

The featured article describes an updated version of the famous Taylor-Couette flow reversibility demonstration. The viscous fluid confined between two concentric cylinders is forced to move by the rotating inner cylinder and visualized through the transparent outer cylinder. After a few rotations, a colored blob of fluid appears well mixed. Yet, after reversing the motion for the same number of turns, the blob reappears in the original location as if the fluid has just been unmixed. The use of household supplies makes the device inexpensive and easy to build without specific technical skills. The device can be used for demonstrations in fluid dynamics courses and outreach activities to discuss the concepts of viscosity, creeping flows, the absence of inertia, and time-reversibility.

Letter to the Editor

Solutions of the Schroedinger equation for piecewise harmonic potentials: Remarks on the asymptotic behavior of the wave functions by Francisco D. Mazzitelli, Martín D. Mazzitelli, and Pedro I. Soubelet. DOI: 10.1119/1.4994808