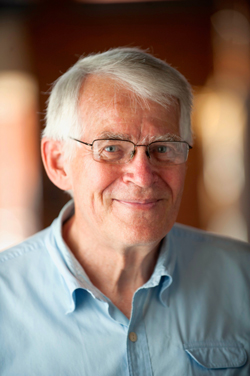 College Park, Maryland, United States, November 6, 2019—The American Association of Physics Teachers (AAPT) has announced that the 2020 Melba Newell Phillips Medal will be awarded to Richard Peterson, University Professor of Physics – Emeritus, Bethel University, St. Paul, Minnesota. The Medal will be presented during a Ceremonial Session of the AAPT 2020 Winter Meeting in Orlando, Florida.

Peterson has brought to AAPT’s executive level leadership a passion for experimental physics and its impact on the lives of students in high school, introductory and advanced laboratories. Following work with the AAPT Apparatus Committee (starting in 1976), he was NSF Principal Investigator for AAPT's Lab Focus-‘93 that sought to reinvigorate all physics teaching lab experiences. Later he helped form the AAPT Laboratories Committee with its emphasis on encouraging more effective physics laboratories. While an AAPT leader, he worked with others in the formation of ALPhA (Advanced Laboratory Physics Association) as a charter ALPhA Board member - helping organize the first ALPhA national conference (2009) at the University of Michigan. He received the American Physical Society's (APS) prize for outstanding research at an undergraduate school and was elected an APS Fellow in 2005. He was recognized with the Jonathan F. Reichert and Barbara Wolff-Reichert Award for Excellence in Advanced Laboratory Instruction in 2017.

He served six years on the AAPT Executive Board as Secretary and four years (2003-2007) within the Presidential track - followed by three years as the first AAPT Meetings Committee Chair. His many years of dedicated and creative leadership have had a lasting impact on AAPT, how we do advanced labs as physics faculty, and on the lives of countless students.

He was an undergraduate at the U. of Wisconsin - River Falls, with a Ph.D. in physics earned at Michigan State - followed by postdoctoral positions in the Physics Division at Los Alamos. His formative decade in physics teaching was at Western Illinois U., with the last 40 years at Bethel U. In 2006 he was appointed the first University Professor at Bethel University for his research, teaching, and physics community service. He served in a 2010-2012 appointment as a Program Director within NSF's Division of Undergraduate Education (DUE) in Arlington, VA.

At Bethel he has worked closely with students and colleagues in developing new methods for fast interferometric and holographic measurements. He helped initiate Bethel University's project approach to advanced teaching laboratories accompanying many upper division physics classes, and he has long championed a close connection between an enriching advanced lab program and quality undergraduate research.

In 2010 the Optical Society of America (OSA) recognized him as a Senior Member for work in optics, and he has served as a Traveling Lecturer for the OSA. He especially enjoys the development of new apparatus for interactive physics demonstrations and laboratories and has widely shared these demonstrations. His presentations on lecture demonstrations, advanced laboratories, and undergraduate research include those in S. Korea, N. Korea, China, Latvia, and Kenya.

On being recognized with this award, Peterson said: "My professional life has been made possible by physics teaching. This includes all those teachers who have sacrificially believed in me, and also the ways my life has been transformed by the joys and challenges of my own teaching efforts."

About the Award The Melba Newell Phillips Medal honors Phillips for her leadership and dedicated service to physics education. The first woman president of the AAPT and a founder of the Federation of American Scientists, Phillips’ research was in nuclear physics. She served on the faculty of Brooklyn College and the University of Chicago and was a champion of physics education throughout her life. This Award is given only occasionally to subsequent AAPT leaders who display similar achievements and exceptional contributions. The first recipient of the Award was Melba Phillips herself (Emeritus, University of Chicago), in January 1982

About AAPT AAPT is an international organization for physics educators, physicists, and industrial scientists—with members worldwide. Dedicated to enhancing the understanding and appreciation of physics through teaching, AAPT provides awards, publications, and programs that encourage practical application of physics principles, support continuing professional development, and reward excellence in physics education. AAPT was founded in 1930 and is headquartered in the American Center for Physics in College Park, Maryland.