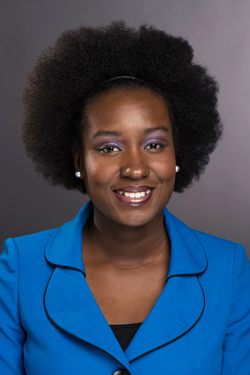 College Park, MD, April 8, 2019—AAPT has announced that Geraldine Cochran, will receive the association's Homer L. Dodge Citation for Distinguished Service to AAPT during the 2019 Summer Meeting in Provo, Utah.

Assistant Professor of Professional Practice in the School of Arts and Sciences and the Department of Physics and Astronomy at Rutgers University, Cochran is a physics education researcher. She earned her Ph.D. in curriculum and instruction with a cognate in physics and her Ed.S. in science education with a specialization in teacher preparation from Florida International University in Miami, FL and her M.A.T. with a specialization in secondary school physics, her B.S. degree in physics and her B.S. degree in mathematics from Chicago State University in Chicago, IL.

On her selection for the Homer L. Dodge Citation for Distinguished Service to AAPT, Cochran said, “I am grateful for the opportunity to be in service to the organization that I consider my professional home, AAPT. In AAPT, I have found a community interested in improving physics teaching and education by addressing issues of inequity and inequality, and promoting social justice in physics. I have learned a great deal from the mentors, colleagues, and friends that I have met through this organization. Attendance at the AAPT National meetings has been a major part of my professional development over the last 16 years. My membership in AAPT has served me well. I look forward to continuing to serve in this organization, alongside my colleagues and friends.”

About AAPT AAPT is an international organization for physics educators, physicists, and industrial scientists—with members worldwide. Dedicated to enhancing the understanding and appreciation of physics through teaching, AAPT provides awards, publications, and programs that encourage teaching practical application of physics principles, support continuing professional development, and reward excellence in physics education. AAPT was founded in 1930 and is headquartered in the Ameriaan Center for Physics in College Park, Maryland.