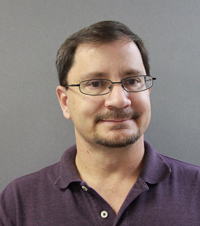 College Park, Maryland, United States, March 2, 2015 —The American Association of Physics Teachers (AAPT) announced today that Dwain Desbien will receive the 2015 David Halliday and Robert Resnick Award for Excellence in Undergraduate Physics Teaching. This award is given in recognition of contributions to undergraduate physics teaching and awardees are chosen for their extraordinary accomplishments in communicating the excitement of physics to their students. John Wiley &Sons is the principal source of funding for this award, through its donation to the AAPT.

Desbien earned a B.A. in Physics at Grinnell College and his M.S. in Physics at the University of Kansas. While at the University of Kansas he began his teaching career as a Teaching Assistant and did Research in Nuclear Physics. He taught at Highland Community College, Highland, KS before beginning his Ph.D. work at Arizona State University. While working on his Ph.D. at ASU Desbien taught at Chandler-Gilbert Community College where much of his data was collected for his dissertation. While working on his degree he was a Teaching/Research Assistant in Physics Education Research. Desbien was hired by Estrella Mountain Community College to start their Physics program in 2001 and completed his Ph.D. in 2002, As a Physics Professor and former Division Chair, he has built a premier physics teaching program, recognized as one of the ten best Two-year College programs in the United States by the Spin-Up/TYC Project.

Since 2006 he has served as Co-PI on the Two-Year College Physics Workshop Project, helping conduct 3-day intensive workshops around the U.S. At many of these workshops, he was one of the main presenters of modeling discourse management, MBL, simulations, computational modeling, and other student-tested curricular ideas and activities that have worked successfully in introductory physics at many schools and colleges. He has been one of the three primary presenters at the Two-Year College New Faculty Training Experiences, and led a series of workshops dedicated to developing new laboratory activities for introductory physics.

Building on the accomplishments of Malcolm Wells, who revolutionized high school physics teaching with his contributions to Modeling Instruction, Desbien has creatively and tirelessly worked to encourage students to take charge of their own learning. He developed new techniques to achieve that goal, such as Modeling Discourse Management, Circle Whiteboarding, and Seeding. His skill in implementing such techniques has made him a very effective physics teacher. His continued efforts to help others develop these skills have made a major contribution to physics education.

Finally, his students are enthusiastic in their praise of his selfless service, support, and creative engineering of learning experiences that empower them to learn in their unique life circumstances.

Regarding his selection for this award he noted, "I was humbled and honored when told I would receive this award. It is a great honor especially when looking at the extremely high caliber individuals who have received this award before me."

About AAPT
AAPT is an international organization for physics educators, physicists, and industrial scientists—with members worldwide. Dedicated to enhancing the understanding and appreciation of physics through teaching, AAPT provides awards, publications, and programs that encourage practical application of physics principles, support continuing professional development, and reward excellence in physics education. AAPT was founded in 1930 and is headquartered in the American Center for Physics in College Park, Maryland. For more information: Contact Marilyn Gardner, Director of Communications, mgardner@aapt.org, (301)209-3306, (301)209-0845 (Fax), www.aapt.org.