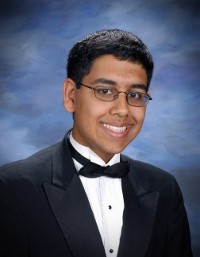 I've always liked math, so in 6th grade, I tried out for my middle school's math team. To my surprise and disappointment, I didn't even qualify to attend practices. Undaunted, I joined MATHCOUNTS, a club similar to math team, and trained hard outside of club practices, spending countless hours practicing, learning new concepts, and seeing steady improvement. My passion and dedication paid off - by 8th grade, I was a two-time MATHCOUNTS National Competitor, a USAMO Qualifier, and captain of the math team I hadn't been able to join a mere two years earlier.

In 9th grade, I took my first physics course, and was fortunate enough to be taking calculus at the same time. With calculus, all the equations I otherwise would have had to memorize without really understanding, from moments of inertia to expressions of potential energy, became simple corollaries of other equations ("just take the integral"). I also joined the Blair physics team, getting a bit of exposure to more advanced problems.

I would like to thank Mr. James Schafer, my physics teacher and our physics team coach, and Mr. Eric Walstein, my math teacher and our math team coach. Without their hard work and dedication, many of my physics and math experiences would not have been possible. I also owe a great deal to the Blair magnet program and to the amazing people in it, from whom I've learned a lot. I'd also like to express my appreciation for AAPT, for making possible this experience in particular. Finally, I certainly wouldn't be where I am now were it not for my parents' unfailing encouragement.

When I'm not doing math or physics, I enjoy playing tennis, and I joined the Blair tennis team last year. I improved considerably while practicing, and it was really fun. I also joined the Science Bowl team last year, and I found Science Bowl to be incredibly fun. It provided a way to use my science knowledge in a light-hearted, team-oriented format. Along the way, I also picked up facts about branches of science I don't know as much about, such as biology and earth science.

Next year, I will continue my studies of math and physics at the Massachusetts Institute of Technology. More short-term, I look forward to getting the most out of my final days of high school, and especially to attending the U.S. Physics Team camp. See you there!