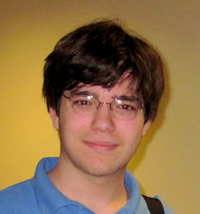 I have lived in Longmeadow, Massachusetts all my life and I'm a senior at Longmeadow High School. Next year I'll be attending Caltech where I hope to major in Physics, with possibly a minor or second major in computer science.

When I was little, before I could read, I remember my mom showing me pictures that had come down from the Hubble. I kind of accepted as normal that people did science, and that an image coming from a hundred quadrillion miles away to be part of a book in front of me was par for the course. It was only later that I realized quite how remarkable modern science is.

This has led me to believe that when you accept something as commonplace, you tend to forget how unusual it is. The computer sitting on my desk moves trillions of electrons around at tremendous speeds in intricate patterns so small that I would need an electron microscope to see them, all so that I can type these words. The trees I see when I look out of my window use organic nanomachines to convert carbon dioxide into sugars for energy storage. Even my desk is being held together at this very moment by extremely powerful electromagnetic forces, oscillating in response to every external stimulus. I love thinking about how strange the world really is and I try to figure out its mysteries for myself when I can.

This past summer I had a chance to put this into practice. I had an internship working on Single Walled Carbon Nanotubes at Johns Hopkins University. I was told on my first day to read the literature, find a problem, and run with it. It was wonderful! I ended up writing a piece of image processing software which characterizes atomic force microscope pictures of carbon nanotubes, counting them and determining their lengths from noisy images. My software does in minutes what people take hours to do. The lab I worked in is applying for patents on the algorithms I developed there.

While science is a huge part of my life, it is not all that there is: I am an avid science fiction fan (Asimov especially), I am always trying to take a photo which I feel represents more than its apparent subject, and I love my family. I would like to thank my family and my physics teacher Mr. Aaron Keller for encouraging me to participate in the first round of the Physics Olympiad, and I'm looking forward to the training camp!