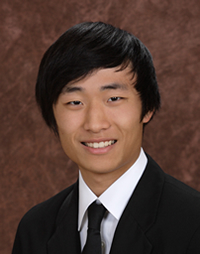 As a high school senior who is passionate about problem solving, I have been most fortunate to have been granted many opportunities over the years in both math and the sciences, including being able to participate in the United States Physics Team last year. Thus, I am extremely honored to be invited once again this year, and I am excited to reunite with the coaches and last year's members, as well as to meet all the new members. I am looking forward to both the hard work and the adventure!

Last year's Physics Camp represented a major turning point for me in science research, when I got to speak with Nobel Laureate Dr. John Mather about his own research and the challenges he had faced. I had been conducting research on developing mathematical models and computer simulations to study the biophysics properties of cancer tumor cell clusters. Applying what I learned from him to my research, I was able to get past several obstacles that had been stumping me, and then I invented a most useful mathematical equation that helped my work to progress.

In July, I presented my research at the Annual Meeting of the Society for Mathematical Biology in Brazil. Exchanging ideas there with some of top scientists in Mathematical Biology was exhilarating and an eye-opening experience. I realized that in the long term, I am most fascinated by the use mathematics and physics as tools to solve many of today's challenging medical problems. Thus, one of my projects has been to spread the gospel of mathematics by starting an Orange County Math Circle. This past year, I've built the Circle up to engage more than 1,000 students in Southern California in a variety of mathematics challenges.

My most recent adventure entailed being named a 2011 Intel STS Finalist. As such, I had the honor to meet President Barack Obama at the White House on March 15. Despite his hectic schedule, President Obama took the time to see all 40 Finalists, shook our hands individually, congratulated us on our achievements, and encouraged us to do great things for the country. Not only was I drawn to his charismatic personality and great sense of humor, I was particularly impressed by his genuine support of the STEM education and was inspired by his clear vision in future innovations as our nation's priority. With that great vote of confidence and encouragement, I am especially looking forward to another awesome experience at this year's Physics Camp.

I am a believer in using the opportunities one is handed to contribute constructively to the world. In particular, I am fascinated by how mathematical and physical sciences can be used to find solutions to the most challenging medical problems of our day. I will be attending Harvard University this fall and plan to study Physics with a focus on Biophysics.