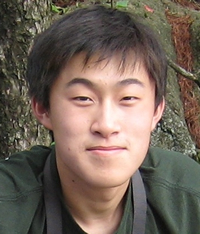 Physics and physicists have always been a part of my life. Part of this is because of my father, who is an experimentalist working at Argonne National Laboratory and teaching part-time at the University of Chicago. He never forcefully induced me to learn physics, but instead would always point things out that would spark my interest. When I was younger, I would often visit his laboratory at Argonne, where I would wander around optical tables filled with lasers, beam expanders, beam splitters, oscilloscopes, and all sorts of wonderful stuff. Since Argonne has nice long hallways, I would sometimes go there to test my wheeled vehicle, scrambler, or whatever the vehicle event was that year in Science Olympiad. Testing a mechanical vehicle is filled with problems, some that just don't make sense, and some that get worse when you try to fix them. I would get frustrated and stressed as the day wore on, but sometimes a physicist walking by commented on my work, which would always cheer me up.

I also remember, as a child, watching the Elegant Universe on PBS. The three-hour special on tiny strands of "energy" vibrating in 11 dimensions introduced me to modern physics. It was my first real glimpse of special relativity, general relativity, and quantum mechanics. I watched it over and over again as I grew older, and even had a showing at my birthday party one year, which was rather well received. Then, I discovered Feynman's two autobiographical books, detailing his own life and love of physics, among other things. They remain my favorite books to reread in my spare time because of Feynman's electrifying voice as well as his funny stories.

During my sophomore year in high school, a physics teacher of mine, who was a particle physicist that left Fermilab to teach at my school, was offering an extracurricular quantum mechanics class in the evening. Since I go to a boarding school, evening classes are no big deal transportation wise, so I jumped at the opportunity and had a blast learning some real quantum mechanics up to the workings of a non-relativistic hydrogen atom. My first encounter with Physics Olympiad was in the same year. Another one of my physics teachers notified me of the opportunity, and I thought it was worth a shot. To my surprise, I managed to make it to the semifinalist round along with a good friend of mine, whom I had known and worked with since first grade, Eric Spieglan. He, of course, got a lot farther last year than I did. Eric's unstoppable work ethic has always encouraged me to work harder. I have him, my teachers, my family, and my many other good friends to thank for always being there to help me and guide me.