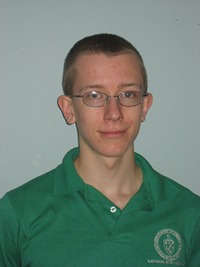 I run. I do physics. Pedagogy and biomechanics are interesting but less dominantly so.

I am a pedagogue. I am not a physicist. I am not a runner. I am not a nerd. All four choices figure prominently in my life, so the only conclusion is that I have a special meaning of "am" since I must assume that "I" "a" and "pedagogue" are clear. One can see my nerdish roots in the choice of an unclear answer to the question "who are you?" which is a prominent meme of the show, Babylon 5. In that I write this essay for a physics olympiad biography, it is clear that physics is prominent.

In person, I find smart people. I have a denumerable set of 6 close friends, all of whom I have tried to join in some learning endeavor or another. One of them I have taken as a protege. When I find a person who displays exceptional scientific talent, I make an effort to smooth the path for him or her. Books are easiest to provide. If a student is willing to follow up and meet with me so I can teach something it brings special glee to my heart. If that student is already a close friend, I call him a protege, and he is the important person of my life.

In class, I see through the wrong pair of eyes. I like to think of the teacher's eyes as the right pair, however. Not a day goes by in class when I don't wonder about the most efficient way to present the latest derivation, or pay closer attention to the occasionally confused reactions of students. When that happens, it troubles me. I always want to better understand misunderstandings about science, because it is unfortunate that so few successfully carry on past them to become physicists.

Both such motivations drive me to help people to teach themselves using the lessons I've learned in the process of bringing myself to this point. Ever since I returned to school from physics olympiad last year, I've been puzzling out how I could reshape my school to make it easier for others to follow in my footsteps, or to blaze trails of their own. Maybe I could persuade the science department to relax some of the class dependencies, or to encourage the earlier taking of high school physics, rather than waiting until sophomore or junior year. I don't know. I do hope to leave behind several great young physicists. In that way, I hope to leave behind something greater than myself. That is who I am.