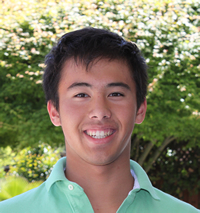 I am a currently a junior at the Harker School in San Jose, California. I love all fields of math and science and have participated in many of these competitions. My first foray into math competitions was the AMC 8 I took in 5th grade. After that, I became quite involved in math competitions, particularly the AMC and Mathcounts. In both 7th and 8th grade, I qualified for the USAMO and represented California at the National Mathcounts competitions. I enjoyed solving problems of varying degrees of difficulties and in many different fields which lead to my involvements in many olympiad-level competitions listed above.

My interest in physics began when I took the Honors Physics class in my freshman year. Although I did not immediately begin preparing for physics competitions, I enjoyed the class a lot. I truly appreciated the combination of theoretical problem solving and performing experiments. I decided to take the AP Physics C class the following year which gave me more in-depth knowledge of mechanics, electricity and magnetism . This year, though I am not taking any physics class, I have spent the year developing my problem solving skills, reviewing basic physics concepts, and applying them to solve some practice problems. Independently, I also read more on topics not covered in my AP Physics, most notably thermodynamics and waves. I thought that I had only a slim chance of being invited to the training camp, and I was surprised and overjoyed to be part of the 2011 US Physics Team.

Besides math and science, I truly enjoy sports and music. I am a member of the varsity swim team at my high school, and I founded the school Ultimate Frisbee club with a few of my friends. My favorite sports team is the San Francisco Giants, who will once again win the World Series in 2011 (you heard it here first)! I have been playing piano ever since I was five years old and have performed and competed in many different venues and levels. Above everything else, I look forward to meeting other team members and learning physics with so many talented individuals in May.