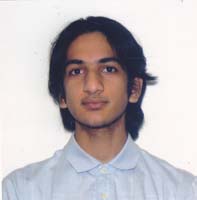 I can't really ever remember a time when I wasn't interested in math and science. I remember playing with primitive motors and circuits, combining like terms, and learning what DNA stood for in elementary school. I went from being interested to being dedicated after reading Surely You're Joking, Mr. Feynman! and Charles Seife's Zero and being introduced to the simple joy of exploration and the concept of infinity. From then on, I spent my weekends at Borders reading Scientific American and books like Kenneth Ford's The Quantum World. After a few months, I found that I had reached the limit of what I could learn qualitatively and that I would have to gain a stronger mathematical background before returning to physics.

Throughout middle school I focused on gaining the mathematical background to better understand the concepts I had read about. Through my learning, I discovered that I enjoyed another kind of applied math - computer science. I also noticed that whatever science course I took in school, I wanted to make that my profession.

I was re-introduced to physics two year ago when I took the AP course. Every day in class, we spent the majority of time on derivations and learning in detail where every theorem and relation came from. Seeing mechanics and E&M built from the ground up renewed my interest in physics and made me want to pursue a deep understanding, rather than just a collection of interesting facts. Outside of class, I worked from the Tipler textbooks and the MIT OCW. I also began tutoring and lecturing on simple topics in physics where I tried to focus on the logical origins and the joy of discovering physics. The greatest part of physics (especially over overly complex mathematics) is that for all the abstract concepts involved, everything is fundamentally grounded in nature.

I look forward to meeting everyone from across the country at camp in two weeks.