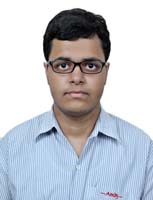 I am very excited to be part of the US Physics team again. Last year's camp had been an extremely rewarding experience as I was able to improve my understanding of Physics and meet a lot of amazing people. I am looking forward to meeting everyone!

I would like to thank my Physics teachers Mr. Alok Kumar and Mr. Shyam Sainani for their constant encouragement and support (and an endless supply of interesting problems), my parents for their patience and guidance, and last but not the least, Amity International School, NOIDA for providing me the platform and the infrastructure to participate in international competitions.