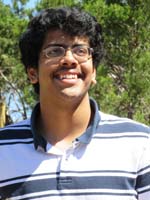 It’s been so long since I started doing math and physics that I don’t quite remember why I started. I think it was some strange combination of my parents’ coercion, my desire to follow in my brother’s footsteps (He was on the 2015 US Physics Team), and my own curiosity. Regardless, I got into it. I started reading Introduction to Algebra by Richard Rusczyk and Fundamentals of Physics by Halliday and Resnick, despite my mom protesting that I was too young and reading it too early might spoil it for me.

As I got deeper into the fields, I started finding new reasons to pursue them. I began to appreciate the value of trying to solve a problem whose solution you could not immediately see. In math, I marvelled at how I could stare at a problem for hours and not see anything new, and then suddenly spot a clever factorization or a convenient reinterpretation and have the solution within minutes. In physics, I grappled with trying to understand how the situation described would behave so that I could apply some reason and math, as well as with trying to reconcile my intuition with the equations I generated.

Soon, I started competing in contests to see if my work had any positive results to show. For the most part, initially, my scores showed nothing special. I was told not to take them too seriously, and I didn’t. I moved on. I saw math and physics as exercise for my brain. As long as I tried to do something that was harder than what I had done the day before, I was progressing. If I proceeded far enough, my scores would surely follow.

So, I look forward to attending the training camp, not only as a tangible testament to my efforts, but also as an opportunity to meet others who are as interested in physics as I am.

I want to thank my brother, who helped me understand things which made no sense to me at all, and told me what books to read, where to look for information, and in general made learning math and physics infinitely easier for me, while also encouraging me to figure things out on my own. And, of course, thanks to Aai and Baba for everything.