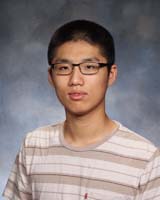 When I first saw that I had to write an autobiography, I knew I couldn’t simply base it solely on how I became who I am now. Although my avoidance of those topics makes them neither less true nor less important, I believe it is equally as important to express one’s roots with the journey.

I attend school at John P Stevens High School in the humble town of Edison, New Jersey. Like Edison, JP Stevens is extremely diverse with a 70% Asian population. It is in this town and school where my love and curiosity for math and science were able to fully blossom.

When I first arrived in the United States, I didn’t know any English. As the other kids in my neighborhood played outside, I dedicated myself to learning the alphabet. Once I understood my first few words, I was introduced to the concept of mathematics. Instantly, I fell in love with the logic and beauty that it had.

In 6th grade, I was introduced to the idea of math competitions: Mathcounts, AMC 8 and local competitions. My first experience in a math competition wasn’t a good one. Nevertheless, I continued to push forward, boosted by my flames of desire to become better than what I was already. This desire, which later expanded to include the sciences, remained with me as I moved into my high school years. In high school, I was determined to continue my appreciation of math. I participated in more math competitions the AMC 12, AIME and the USAMO and joined the math club at my school.

Similar to my love of mathematics, my devotion to physics started early. I was always interested in how the world around me worked. Why do I feel pushed when a car is turning? How do lights work? What makes a bike move? Although I initially didn’t know the term to describe such questions, I eventually came across the word “Physics” that provided the answer to all my questions. Alongside my love of math, my love of physics grew equally as fast. I wanted to know more about the magical subject. In high school, this desire sparked my first contact with physics competitions: the F=Ma. As I became more involved with physics competitions, I became more and more in love with the subject. This love propelled me to achieve a silver medal on the USAPhO in my sophomore year and was the fuel that allowed me to aim even higher. Additionally, I chose to invest my time within my school’s clubs to build on my knowledge of physics and science: Science Olympiad to expand my horizons, Science League to test my limits and, most importantly, Robotics as a captain to both apply my knowledge of physics into a real world scenario and to satiate my interest for programming.

In the end, my desire to grow and learn has brought me here. I am honored to participate, with many other bright minds, in the prestigious US Physics Team. However, I couldn’t have done it without the help of my teachers, mentors and parents. I would like to thank everybody who has supported me through my journey to this day and those who have taught me both lessons of life and physics, Most of all, I would like to thank my mother who encourage me to continue no matter how tough the times were.