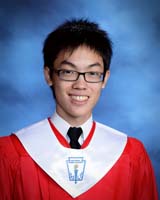 The first physics question I really remember actually thinking about was Zeno’s paradox. Of course, I had the usual physical curiosities as a child: why do planes stay up, why does light bend when it goes into my water cup? But for those questions, I was content with hand-waving answers of “because wings,” and such. Sure, I had no clue about aerodynamics or the refractive properties of light, but at least those answers made sense.

Zeno’s paradox was a different beast; it just seemed to lack any intuitive explanation. After bringing it up with my dad, I remember arguing for over an hour over the issue. What exactly the arguments were, I have no idea. There’s not much you can explain to an elementary schooler who was still working on multiplication tables, but my stubborn drive for a satisfactory answer could not be stopped. Of course, I had no doubt that I was wrong; after all, an arrow will catch up to a running man, no matter how much mathematical trickery you apply. But I needed to know why. For the first time, I became aware that there was some grand mathematical framework that ruled our world, but which, for the moment, was beyond my seven-year old-self. Looking back now, having finally taken calculus last year, I can confidently say that my dad was right, a converging sequence will indeed converge, but the almost ten-year long gap between question and answer (amongst other such questions) set the stage for my insatiable curiosity about physics.

Of course, my relationship with physics wasn’t limited strictly to philosophical ponderings. Like many of my peers, my competitive academics career began with math competitions, starting with MATHCOUNTS in middle school. Though I was an even performer across all of the major categories, my favorite questions were always though that involved names. For some reason, Adam, Bob and Charlie were easier to visualize than obscure variables with subscripts and superscripts. Physics, then, was a natural path to go down, sharing the creative energy needed in math problems while also guaranteeing a diagram to every problem. Go free-body diagrams and fancy circuit loops!

I took my first physics class as a sophomore with the inaugural AP Physics 1 class and was also introduced to the F=ma exam that year. Though the exam that year was apparently “easy,” I remember flunking it. Undeterred, I returned the next year, this time taking the calculus-based AP Physics C and making it to the USAPhO round with a question to spare. Once again, I flunked the exam, managing to solve one and a half questions in three hours. To be fair, the testing circumstances were less than idea; being the first person to make the USAPhO in over four years, my Physics C teacher and proctor, Mr. Newland, decided last minute to test me in a laboratory closet with a light that would turn off every 10 minutes unless I got up and stomped around. Finally, coming into senior year, I had exhausted the physics class selection at my school, so instead I focused on some areas that had stumped me previously such as thermodynamics and relativity since those two subjects aren’t covered on the AP curriculum. I returned to the USAPhO prepared in more ways than one, with not only a firmer grasp over physics but also a plan to deal with the closet light situation. The plan worked, and here I am.

Given the trend of the last two years, I can only expect to flunk whatever devilishly hard test they have in store for me at camp, but I am very excited for the opportunity this summer to learn more about physics.