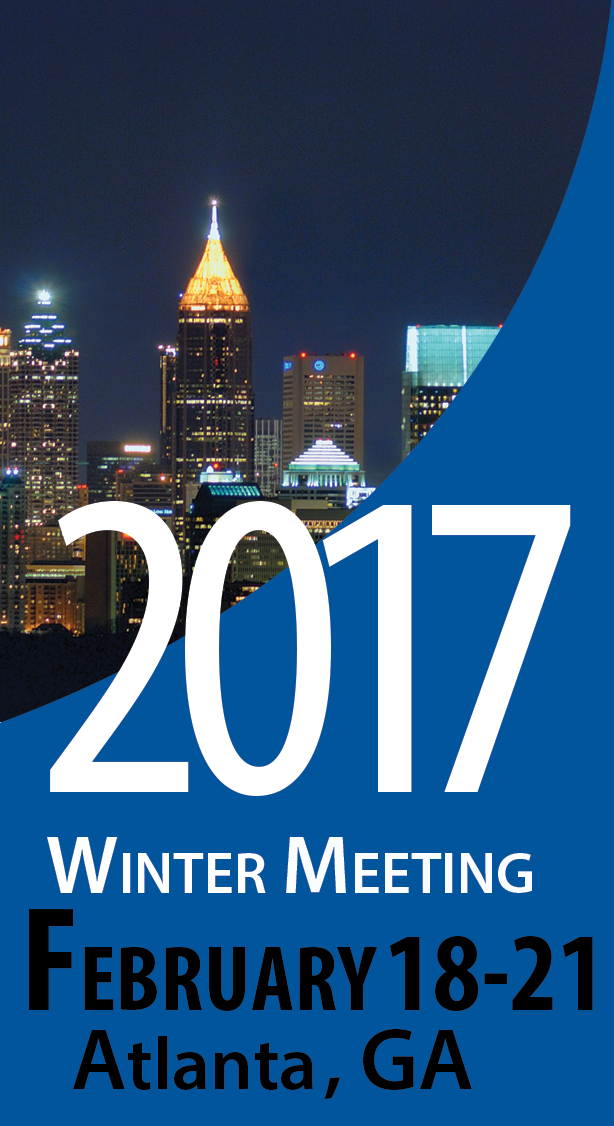 The headquarters hotel for the 2017 Winter Meeting was the Atlanta Marriott Marquis, located in Peachtree Center. Convenient to many of the popular cultural, sports, shopping, and dining venues, the location offered attendees opportunities to explore and enjoy the city and that famous Southern Hospitality.

The sessions, tutorials and workshops covered a wide range of interests and levels from the novice to the experienced teacher. The Georgia Institute of Technology was host to more than 20 workshops on Saturday and Sunday with selection ranging from Dark Matter and Neutrinos to Low-Cost, At-Home Labs for School-based or Online Courses. The Trans-Disciplinary Project-based Instruction in Biology and Physics workshop was held at Spelman College. Commercial Workshops were hosted by PASCO Scientific, Expert TA, Lab4Physics, and Vernier. AAPT sponsored a special workshop, Safety, Respect and Inclusion: How To Be Part of the Solution. The event was in keeping with the association's position on "Supporting and Enhancing Diversity and Inclusiveness in AAPT."

Early arriving attendees also had the opportunity to participate in a tour of the Fernbank Science Center, featuring a new planetarium show, a collection of tektites, an Aeronautics Education Laboratory, an electron microscope lab, and an authentic Apollo spacecraft from the unmanned Apollo 6 Saturn V test flight.

The plenary talks were given Saturday at Georgia Tech by Stephen Ramaden, Solar Astronomy, space programs, particle physics and the Physics of Music by Michael Ruiz. On Sunday plenary sessions featured "Mars 2020 Mission Overview and the Importance of Planetary Protection" by Moogega Stricker and Ken Bloom speaking on "Discovering the Quantum Universe at the Large Hadron Collider."

The 2017 Richtmyer Memorial Lecture Award was presented to Jay M. Pasachoff, Field Memorial Professor of Astronomy and Director of the Hopkins Observatory at Williams College, Williamstown, MA. His lecture was "Observing the Great American Eclipse of August 21, 2017." A veteran of 64 solar eclipses, he is Chair of the International Astronomical Union's Working Group on Solar Eclipses and a member of the American Astronomical Society's Solar Eclipse Task Force. His recent research includes studies of the dynamics of the solar corona studied from the ground at eclipses and from spacecraft, and the temperature and structure of the corona over the solar-activity cycle from images and spectra. He also studies the atmosphere of Pluto through observation of stellar occultations. His recent eclipse and other solar research is and has been supported by the NSF and the Committee for Research and Exploration of the National Geographic Society;his Pluto research has recently been supported by NASA.

Jan Tobochnik, recipient of the 2017 Oersted Medal addressed "The Changing Face of Physics and the Students Who Take Physics." Tobochnik is Dow Distinguished Professor in the Natural Sciences, Kalamazoo College, Kalamazoo, MI. Within the physics community, Tobochnik has provided important professional services including co-editing the first ever theme issue of the American Journal of Physics (AJP), co-creating the Gordon Conference on Physics Research and Education series and co-chairing its first conference, co-editing the Computer Simulations section of Computers in Physics, and above all else, he had a successful stint as the Editor of the American Journal of Physics (2001-2011). Tobochnik has served on several AAPT committees, more recently, he has been a member of the AJP Resource Letter Advisory Board. He was also a Divisional Associate Editor of Physical Review Letters (2001-2006). Tobochnik has received numerous awards, including the AAPT Homer L. Dodge Distinguished Service Citation, Fellow of AAPT, and Fellow of the American Physical Society.

Ernest R. Behringer, Eastern Michigan University, has served as president of the Michigan Section of the AAPT, as the chair of the AAPT Area Committee on Physics in Undergraduate Education, on the AAPT Governance Committee, and as a reviewer and an Advisory Board member for the American Journal of Physics. He has also served as a board member of the AAPT-affiliated Advanced Laboratory Physics Association (ALPhA), as well as on the organizing committees of the 2012 and 2015 topical ("BFY") conferences. He currently serves as the chair of the AAPT Undergraduate Curriculum Task Force.

Richard Gelderman, Western Kentucky University, is the director of the Hardin Planetarium. He has been instrumental in increasing the vitality, scope, and effectiveness of the Space Science and Astronomy Committee. Gelderman has also contributed to many other committees and activities in his many years of service to AAPT. In particular, he has served on the Membership and Benefits Committee, the Nominating Committee, the Programs Committee, Meetings Committee and as chair of the Science Education for the Public Committee.

Sharon Kirby, University of West Georgia, has a distinguished record of teaching and learning at the high school level and more recently at the university level with courses for education majors. A Physics Teacher Resource Agent (PTRA) since 2000, she has assisted in leading many PTRA workshops for teachers in the University of Georgia system. She has presented workshops and papers about the PTRA professional development at many state, regional, and national meetings, including national AAPT meetings.

Kenneth S. Krane, Emeritus Professor of Physics at Oregon State University. He has been a member of the American Journal of Physics (AJP) Editorial Board as well as an AJP Associate Editor, a member of the Committee on Physics in Graduate Education (1994-1997), a member of the Nominating Committee (2006), and a Principal Investigator, Director, and founder of the AAPT New Faculty Workshop from 1995-2006. He is also the 2004 recipient of the Robert A. Millikan Medal, a 2014 AAPT Fellow, and a co-leader of the Strategic Programs for Innovations in Undergraduate Physics (SPIN-UP) project, providing guidelines and recommendations to physics departments that led to more than doubling of the number of bachelor's degrees awarded in physics over the past 15 years.

Ann M. Robinson, University of West Georgia. Robinson has a distinguished record of teaching and learning at the high school level and more recently at the university level with courses for education majors. A Physics Teacher Resource Agent (PTRA) since 1999, she has been an instructor for many PTRA summer workshops for science teachers in several different states, but especially, at the University of West Georgia. She has helped to write proposals to fund PTRA professional development and has presented papers about PTRA professional development at many state, regional, and national meetings, including national AAPT meetings. Robinson has served the association as a member of the Southern Atlantic Coast Section and as the Vice Chair of the Committee on Physics in Pre-High School Education.