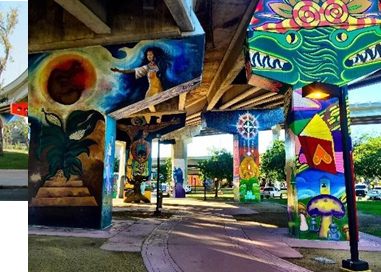 Chicano Park is the crown jewel of this predominately Latino community and a celebrated national destination for its rich display of art and culture. The tour will begin with an overview of historical Chicano Park, the Monumental Murals and include expressions of lowriding and their connections between art, science and engineering. Today 79+ historic murals grace the soaring pillars of the San Diego-Coronado Bay Bridge that dissect the neighborhood, giving way to a canvas that amounts to nothing short of an outdoor open-air museum. The park —recently named a National Historic Landmark and listed on the National Register of Historic Places —is an iconic destination where visitors can explore Chicano art, history, and culture is one of the largest collections of Chicano public art murals in the world.  Barrio Logan as a whole has taken a nod from Chicano Park and boasts a thriving artists' community, with a rich cultural tradition long rooted in Chicano history and the struggles of this working class neighborhood, dissected by a freeway, a bridge and impacted by the nearby marine, ship building industry and the Navy. The arts community often reflects Chicano activism and battles for social justice. Chicano Park brings tens of thousands of students, tourists, and art enthusiasts into Barrio Logan each year, setting the stage for its new designation as a Cultural District by the State of California. Numerous artist collectives, galleries, and boutiques and are found in the Barrio and a stretch of Logan Avenue just east of the park includes a large concentration of galleries, studios, restaurants, cafes and breweries that showcase local art and traditional foods.

The DIII-D Tokamak is the largest magnetic confinement fusion device in the US and provides research results to the world-wide fusion community to advance fusion science and technology. DIII-D is operated by General Atomics for the Department of Energy. During this tour, participants will engage in a presentation on plasma and magnetic field interactions, diagnostics used to measure plasma characteristics and the path being used toward the building of ITER - the largest fusion device ever built. Demonstrations will include plasma, magnetic field producing coils, plasma and magnetic field interactions, a cloud chamber to visualize radioactivity, and more. Participants will then have a walk-about of the facility and see the DIII-D Tokamak and its peripheral equipment, a full scale cross sectional model of the machine, control room, power supply areas, and a set of gyrotrons (microwave generators) that are used to put MWs of power into the plasma. We will also discuss the key educational components of our backgrounds (physics, mechanical engineering, computer science, chemistry, etc.) and how middle &high school teachers and college professors can weave plasma/fusion concepts into their instruction on topics they are already teaching. Cookies and water/soda will be provided and participants MUST wear closed toe shoes. Cameras are permitted. Unfortunately, due to residual magnetic fields that exist within the machine hall (where DIII-D resides) persons with pacemakers are prohibited from visiting certain parts of the tour.

Some photos courtesy of sandiego.org