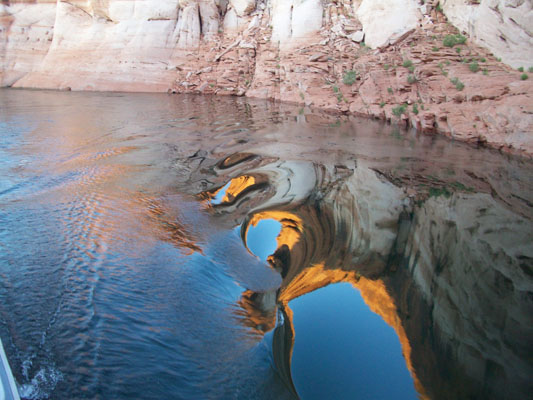 This photo of a lake in Utah contains two major physics concepts: reflection and mirrors. Reflection occurs whenever light hits an object. The law of reflection states that the angle of incidence is equal to the angle of reflection. Looking at the reflection of the rocks on the surface of the water is an example of light rays reflecting off the water and towards the observer. Light always follows the law of reflection whether reflecting off of a curved or a flat surface. The light reflecting off of the wake of the boat is reflecting off of an irregular surface which scatters the light waves coming back off of the water in many different directions, distorting the image. The wake of the boat made the water form concave and convex mirrors. The center part of each wave acts as a concave mirror to the rocks reflecting upon it. Concave mirrors are capable of producing real images as well as virtual images. For a concave mirror, the normal at the point of incidence on the mirror surface is a line which extends through the center of curvature. Concave mirrors only display virtual images which are inverted. This explains the weird curvature of the reflection of the mountains around the circles of water. With convex mirrors, which appear on the outside walls of the dips in the water, the normal changes with the curvature, therefore the light rays diverge from the object distorting the image of the rocks to the observer.