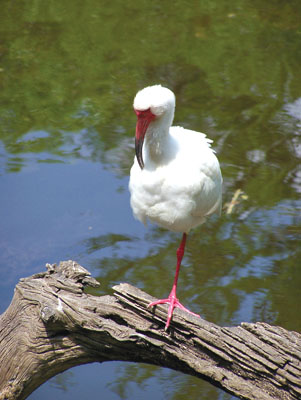 This picture of a white ibis shows physics specifically that of center of mass. The center of mass of an object is defined as the point where all the mass of the object is concentrated. While in this photograph the bird has adjusted its center of mass in order to balance on its one leg, while the other remains tucked in its feathers. When you lift up one of your feet you can't help but shift your weight to prevent yourself from falling over. This shift in your weight is your center of mass or center of gravity being adjusted to keep your body at a stable equilibrium. When the ibis had both feet on the log, its center of mass was about where its underbelly is. However, when it lifted its leg to rest, its body weight shifted and its center of mass also shifted, closer to the leg that was still standing on the log. This photo is an example of how physics can be found anywhere, such as the forest preserve on Sanibel Island, Florida, called Ding Darling.