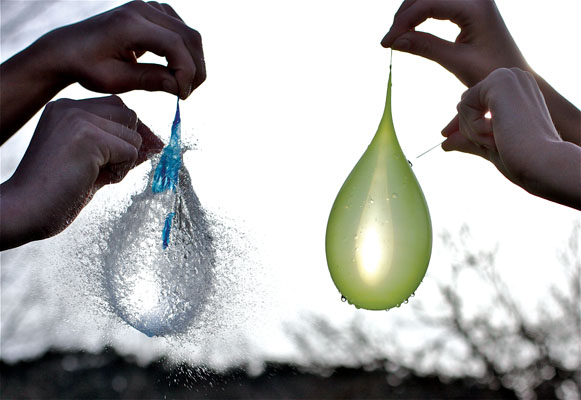 This picture demonstrates the force of tension and the Law of Inertia. First there is the force of tension on the balloon. The balloon is being stretched by the water inside of it and the force of gravity pulling it down. The balloon's ability to pull back on these forces creates tension. The balloon pops however when the net force become unbalanced. The pressure of the water overrides the elasticity of the balloon and the balloon pops. Second, there is the Law of inertia. As stated by Newton's Law, "every object in a state of uniform motion tends to remain in that state of motion unless an external force is applied to it." This thought can be applied to the water balloon as it pops. As the balloon pops, the water will remain together until it meets an outside force. These forces may include gravity, pulling in downward toward the ground, air resistance, forcing water droplets to fall as different speeds, or the ground, causing the water to stop all movement. In this picture, the water remains together for a single moment before these, and more, outside forces pull it down. This picture embodies different forces acting together at a single moment in time.