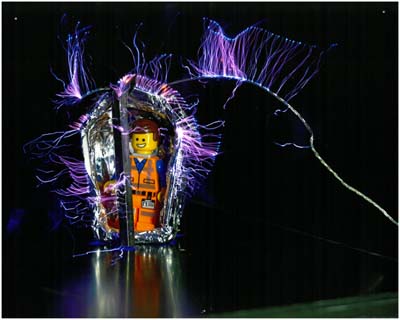 Charges from the miniature tesla coil build up to the point where they can ionize air, and they travel in brilliant bursts of light toward their target. However, despite the many shocks over this photo’s long exposure, the human stand-in is never shocked. Instead, the figurine is saved from electrocution by his conductive coffin, a faraday cage. The coffin, wrapped in aluminum foil and sealed off on one side by an Allen wrench, has relatively less resistance to the flow of electrons than does the figurine, an insulator due to its plastic composition. Charges will follow the path of least resistance to their destination. In this instance, the path of least resistance to the charges’ destination, the ground, is the faraday cage. Thus, the charges flow harmlessly through the cage rather than traveling through the cage’s occupant.