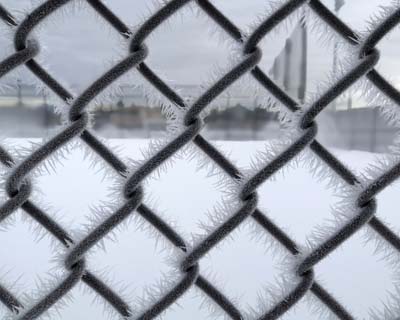 This photograph was taken on a early winter morning after several days of snow, capturing ice crystals that grew overnight on the wire of a fence. These fragile, needle-like deposits of ice, known as soft rime, are observed to occur under cold conditions and light winds, most commonly during a freezing fog. A freezing fog is a low-lying cloud formed out of water droplets that have been supercooled by the cold atmosphere. The droplets’ temperature is below the freezing point, but without anything solid to form crystals around, they can remain liquid when suspended in air. When the droplets come into contact with a solid object, they freeze and attach instantly. With light winds, the droplets bump into objects, such as the fence, and accumulate gradually on the windward side; the addition of supercooled particles form needles of ice growing into the wind. Small droplets of water which accrete slowly, rapid heat loss, and a high degree of supercooling favour the formation of the less dense soft rime as opposed to other ice deposits. Generally, rime forms at around -8?, though at temperatures far below, soft rime may appear without the presence of fog. Its structure consists of small particulate ice crystals that are separated by pockets of air, giving it its granular and opaque white appearance. However, these deposits fall away easily when an object is shaken, which is why wind conditions must be gentle in order to preserve this beautiful phenomenon.