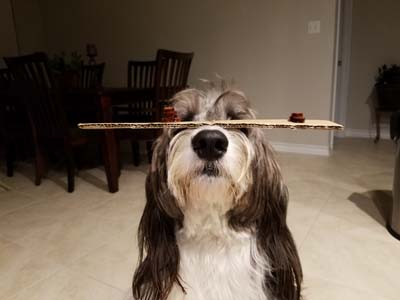 Torque is the product of the distance of a weight from the pivot point (r), and the gravitational force of that weight (F), in the equation (T=r×F×sin(?)). Torque affects the direction of motion, whether of an object on hinges or in a seesaw situation as depicted in my image. While the situation I took a picture of accurately shows this concept, it is not naturally occuring. It was contrived by me in order to show the necessary balancing of forces in order to achieve equilibrium.

In my photo,  there are multiple forces at work. There is a need for equilibrium between the two forces on each side (T1=T2) in order to create a balanced seesaw. This is because each side is applying a torque down in another direction; if there is 10kg a distance of 1m from the pivot point on the left (10kg×1m=T1) and only 5kg 1m away on the right (5kg×1m=T2), the seesaw will rotate towards the left side due to the fact that applied torque is of a higher value- it is NOT in equilibrium. If the 5kg were 2m away, then T1 would’ve been the same value as T2. This is the concept I depicted in my photo, which visually shows how the radius (r) and force affect the outcome in torque, and equilibrium within a system. My picture has both sides applying an equal amount of torque with use of varying distances/forces.