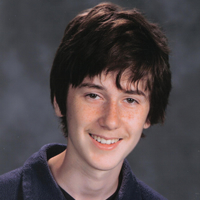 I'm not really sure why I'm interested in physics. The biggest reason is definitely an innate desire to know how things work. When I was younger, I was constantly trying to figure out how things work; one of my earliest inquiries was into how door latches allow doors to close but not to open (unless the latch is retracted). After a significant amount of analysis, which mainly consisted of finding devices that seemed to use a similar principle, I developed a theory about contact forces being perpendicular to surfaces. Years later, I was delighted to learn about the concept of a normal force, which formalized the vague idea I had thought of as a child. For the most part, though, my analysis was less successful; after developing my door latch theory, I decided that airplanes must work in a similar way, with the wings tilted upward so that the air they run into pushes them upward. The horror I experienced when I learned that many airplane wings are horizontal haunted me for years.

In any case, by the end of sixth grade, my mindset had become conducive to studying physics- but, by itself, that wouldn't have got me anywhere. Fortunately, on a trip to FPSIC, I found myself sitting next to a friendly, if a bit eccentric (in my mind) ninth grader, Eugene. During the bus ride, I saw him take out a textbook and begin studying. This was a form of entertainment I had never seen before, so I immediately inquired as to what he was doing. He explained that he was studying physics, and explained some basic ideas, which got me interested. Upon returning home, I demanded a physics textbook from my parents, and they got me a good textbook, which I began studying over the summer. Unfortunately, while my interest in physics was adequate, I was not yet adept enough in mathematics to make significant progress. A serious study of physics had to wait until two years later.

I joined our school's Science Olympiad team in seventh grade, but did not focus on physics-related events at first. The next year, however, I returned and instead chose a circuitry event and an event on optics; I was far more successful in these events than any others. While neither of these events required a significant knowledge of mechanics or electromagnetism, once I started studying physics, I couldn't stop, and had covered basic mechanics, as well as optics and basic circuitry, by the end of the year. From that point on, I began devoting the majority of my energy to studying physics, and took the F=ma and Semifinal exams freshman year. While I completely failed the latter, having almost no knowledge of calculus or electromagnetism, it was enough to motivate me to prepare more this year.

I would like to thank my parents and sister for the encouragement and help they have given me, as well as a local physics teacher, Mr. Shurtz, who taught me most of AP Physics C (which is not available at my school), and a great deal beyond it. I hope that this camp will help my interest in and knowledge of physics expand further, and look forward to it.