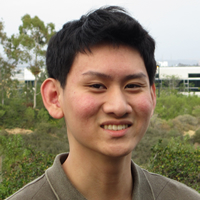 My fascination with math began when I was in elementary school, with my grandfather introducing my third grade mind to "heads and legs" problems. Figuring out the numbers in my head seemed to come naturally to me. Later, I began attending the San Diego Math Circle on Saturday mornings, where I found both like-minded peers and intellectual stimulation. I started competing in math contests, starting with Math Counts and AMCs and eventually reaching the USAMO. Win or lose, I walked away with new friends, new experiences, and a new feeling of wanting to improve, a feeling that kept me coming back every year. Math opened the door for me to science.

When I reached high school, the horizons widened further; I found that there were events like science fairs and Olympiads in multiple scientific subjects. Also, many of the high-level science classes helped spark and foster my scientific interests, and left me wanting to learn more. I finished AP Biology, AP Chemistry, AP Physics C, Calculus III, and Linear Algebra by the end of my sophomore year. One thing I really liked about all of these math and science subjects was how they reached into and built off of each other in sometimes unexpected ways; an example that surprised me was the application of Markov models from linear algebra into protein states from computational biology. All the disciplines also come together in my current research project, which involves computer-based modeling based on Newton's laws to identify chemical compounds with biological activity.

Ultimately, physics became my favorite subject. My first exposure to physics came when I was around ten years old, in the form of the book The Way Things Work. Though admittedly not very rigorous (I found the silly mammoth pictures more entertaining than the material), it showed me one of the beauties of physics, that it explains, well, the way things work. My first formal introduction to physics came much later, in my freshman year of high school. I immediately took a liking to it. Not only did it harmonize with the mathematics I was familiar with, but it also explained why everything is how it is, something that is tactile and concrete. It is such an honor to be a member of the 2013 Physics Team, and I look forward to meeting everyone on the team and learning more physics! I would like to take this opportunity to thank my physics teacher, Mr. Danssaert, and to Dr. Brown, Dr. Li and Mr. Fu for their stimulating lectures and the encouragement they have given me as I built up an interest in physics. I would also like to thank my friends and family for the support they provided me in all of my endeavors.