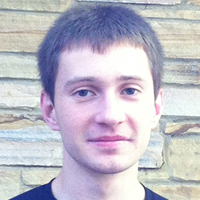 My interest in math probably started around second grade when my parents got me a fourth grade math book, and I realized that the problems in it were actually just simple extensions of stuff I already understood. After that, I started to look around and realized that both math and science were awesome. I'm not sure when I figured out that engineering and building stuff was really cool too- it may have been playing with Bionicles or building circuits and primitive robots in a program after school in sixth grade.

I started out in a strong math program in middle school, but I really didn't start learning science in a serious way until high school. I also discovered then that I was much better at science contests than at math contests. I've always been depressingly bad at math contests, partly because I have an incredible propensity to make stupid mistakes, but also partly because, while I can find many specific problems interesting, I can't get interested in knowing twelve different theorems about triangles that are all applications of the law of cosines. I've been interested in physics for a long time, but my knowledge was limited to formulas and explanations taken from Wikipedia until I took AP Physics last year from Mr. Forbes. That really got me interested in physics in a serious way, and I started expanding my extracurricular learning and started working on understanding the math behind complex phenomena like superconductivity and general relativity. This year, taking a course in computational physics and one on relativity, electrodynamics, and quantum mechanics from an fantastic teacher (Dr. Dell) who knows QFT and is willing and able to explain things has also gone a long way in helping me learn more advanced topics. He has helped me to realize just how awesome physics is.

While I would be unsurprised if many other people at physics camp would strongly disagree, I think biology is fascinating. While biology (like physics) is interesting because it explains things, as you go deeper and ask more and more in-depth questions, you either discover that we don't have an answer or that the answer comes straight from chemistry or physics. The questions that really interest me are in these areas, the intersection of biology and physics and chemistry.

I want to work in synthetic biology, specifically protein engineering. Protein engineering has amazing potential: natural proteins are incredibly inefficient- protein folding is so complex and chaotic that it's amazing anything naturally occurring works at all. We haven't reached the point scientifically and technologically where directed protein design is possible, but I want to work toward making that a reality.

I will be dropping out of high school at the end of this year to attend MIT, where I look forward to seeing many other people from physics camp.