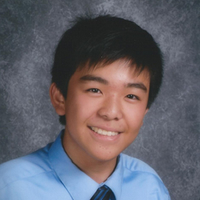 In elementary school, I was the slacker kid who pestered the teacher to give us easier homework. I had never given much thought to an academic future, given my less than stellar behavior and subpar report cards. It wasn't until my friends asked me to join the 6th grade Science Bowl team that things changed and I discovered what I had been missing. My first love was mathematics. During my math elective in my middle school, I was taken aback by the way everything tied together: elaborate algebra problems could be solved using simple geometry, and complex numbers could be applied to so many questions even when they seemed least relevant. I further developed my interest in math through competitions such as the AMC and MATHCOUNTS, where I placed 6th in California in 8th grade.

My enthusiasm for math quickly spread to other areas in science. During my freshman year, two classmates and I began to coach younger students from our school for the Middle School Science Bowl competition, leading to two years of both Regional Champions and National 5th Place for our middle school. Amidst my snowballing interest in math and science, I was eventually introduced to physics in my Honors Physics course. In that class I realized my potential and affinity for this subject. I could finally explain simple phenomena that I had always attributed to my default explanation, "that's just how it works," such as the Earth orbiting the Sun and light pouring from a bulb. Now learning AP Physics C, I am consolidating my knowledge while learning more interesting topics in Mechanics and E&M, such as capacitors and angular momentum.

My other great love is music. I have been playing the cello since I was seven years old, and since then have competed in many competitions, even performing in Carnegie Hall, where I performed the first movement of Locatelli's Cello Sonata in D Major. My favorite cellist is Yo-Yo Ma, due to his impeccable interpretations in all musical pieces and his incredible emotion range.

I am extremely grateful to my teachers, family, and classmates for helping me to make the physics training camp this year, and I look forward to meeting the rest of the team!