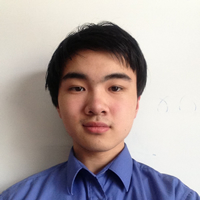 My physics teacher used to tell his students that they would be "masters of the universe" if they could solve physics problems. I've done a lot of physics problems since then, but I wouldn't quite call myself a "master of the universe." But certainly, studying physics has brought me to much greater levels of understanding of the world around me.

I received a very math-oriented upbringing. After I came to the United States from China at the age of two, my father started to invest the majority of his spare time in teaching me mathematics. Mathematics proved to be a very reliable companion for me. Because my father switched jobs often, I had to follow him from state to state across the U.S., often times enrolling in a school only to leave it a few months later. Friends, teachers, and schools came and went. But math stayed. Regardless of where I lived, or what school I attended, one plus one was always two and 2127-1 was always prime.

It was not until the seventh grade that I began learning about physics at Tyee Middle School in Bellevue, Washington. This was a middle school physics course, so naturally the calculations were very simplified and often crudely approximated. Outside of school, however, I used my very rudimentary knowledge of elementary differentiation and integration to reconsider the material covered in class, and I occasionally talked to my teacher to discuss whatever questions I had. I was so sidetracked by my own explorations that I somehow ended with a C in that class.

At the end of that year, my father moved again-this time to California.

My next classroom exposure to physics would not be until high school, in AP Physics C at Los Altos High School. It was in this class that I seriously developed my interests in physics. I discovered that physics combined the elegant abstraction of mathematics that I loved with a firm, concrete connection to the world I lived in. Being able to visualize everything made the subject all the more interesting. When I found out about the F=ma examination, I confidently signed up to take it.

While that went well, I was caught off-guard by the Semifinal exam. I encountered topics that were not part of the AP Physics C curriculum at all, and we had not thoroughly covered electromagnetism at that point. I could only approach the mechanics problems, and provide pitiful attempts for the other ones. My experience with the Semifinal exam inspired me to self-study the other topics in introductory physics this year, and attempt the competition again.