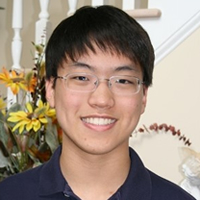 As a child, I was an innocent little kid, inquisitive to the world and wondering what it held in store. At this point, I wasn't too different from anybody else. I did my multiplication tables, I played too much with Legos, and I refused to eat my vegetables (Even now, I'm still a fairly picky eater). It wasn't until the second grade that something different happened to me - evidently, my second grade teacher saw something special in me, and she asked that I be moved up into the third grade. This was my first step into being more than a normal kid - advancing my schooling and learning to more extreme learning. I don't remember exactly who my second grade teacher was, but whoever it was, I thank you for giving me that first push.

My life kept going along that path. I found my penchant in math and science. Math, in particular. I sped through the available math courses, skipping years and running through classes until I finished calculus in my 8th grade year. Also in middle school, I discovered the wonder that was to be known as competitive math. Not what most kids would call a wonder, I know. Yet, to my middle school self, there wasn't anything better than the thrill of the challenge. My brain strained under the thinking as I engrossed myself in AOPS classes and practice Mathcounts tests. Here, I must thank my parents for being so supportive and helpful in my bizarre middle school years. In math, I think I really enjoyed how there was only one answer to a problem but so many ways to find it (Even now, I hate reading comprehension exams for their ambiguity. Yes, choice A is right, but choice C is more right)

I only really discovered science in my 8th grade year. Up until then, I was fairly good in science class - I always got a fairly high A and learned my stuff (Granted, most middle schools, mine included, aren't particularly known for their super challenging classes) My classmates in my calculus class were taking AP Physics C as well, and I was intrigued. A subject that's kind of like math, but with more concepts and ideas to twist and turn? It seemed interesting to me, so I sought out the help of my brother, who was a major part of the high school science team. He, along with my parents, introduced me to the world of science - a world that explained the nuances of nature and subtleties of the solar system. Naturally, I gravitated towards physics - it was the most math-related, and it used the most cognitive thinking (Chemistry was alright. Biology was just... ick. Too much memorization).

So, I started to learn all about physics. Old textbooks, Wikipedia, and online courses all helped me on my quest. I utilized my knowledge in my classes and in science team, earning many medals for my troubles. In my freshman year, I qualified for the semifinalist round of Physics Olympiad. What first started as an interest ended up blooming into a passion. And the rest, they say, is history.