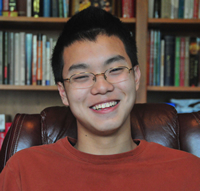 My name is Lawrence Sun and I am currently a junior at the Catlin Gabel School in Portland, Oregon. My first exposure to the world of academic competitions came from the SSP Middle School Science Fair in 2008, when I was a 6th grader. I was selected as a national finalist, traveled to Washington DC, and had a Minor Planet (25326) named after me! After that, I began to participate in MathCounts and the AMC exams. My efforts allowed me to make my state's national MathCounts team in 7th and 8th grade, placing 19th in the national competition in 2010. I also made it to the USAJMO in 8th grade and USAMO in 9th and 11th grade.

Over time I began to explore fields other than math. In 8th grade I took my first physics class, AP Physics B, at a local high school. I found the material fascinating, and felt that with my abilities in math I had a very strong grip on the concepts. The following year I took AP Physics C and enjoyed it thoroughly. At this point I had heard about the physics Olympiad from friends, so I brought up the idea of getting the F=MA exam in my school. I qualified for the semifinals and I was very happy with my performance, despite not advancing any farther. I was determined to do even better the next year, so I studied physics more intensely and learned topics beyond those presented in the standard AP physics curriculum. By the time the physics Olympiad came up the next year, I without a doubt knew my strength in physics had grown, but I had no idea I had done well enough to be put on the 2012 Physics Team. I was in shock and was overjoyed when I received the congratulation message. I am very happy to be invited back again to be on the 2013 team and hope this year I can participate in the travelling team.

In addition to math and physics, I also enjoy computer science. My first introduction to computer science came in the form of a programming class in Python. That was an interesting experience, and since then I've learned numerous other programming languages. I competed in the USACO competition last year and ended the year in the silver level. However, I also commit quite a bit of time in computer science research. Two years ago I studied ways in which formal verification can be used to check the validity of laws, for which I won the 3rd place in computer science in my state's science fair. This work also got me invited to speak at the 2012 IEEE ISMVL conference in Victoria, BC which I spoke at last year.

I am actually skipping my senior year of high school because I have exhausted all the classes I am interested in at my high school, so it would be wise to move onto college next year. I will be studying at the Massachusetts Institute of Technology next fall.