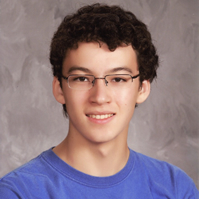 I have been a math person for almost as long as I can remember. Ever since elementary school I've been doing various math contests, starting from local ones and as I grew older, going on to state and national competitions. That is where I got my first taste of what it's like to struggle with hard problems, to be faced with a question that you have no idea where to start on, but have to come up with the solution anyway. That is also where I first experienced the camaraderie of working with friends and also the fierce competition that they pose. All throughout elementary and middle school I was enamored with mathematics. I spent most my waking hours reading math books (thank you, Art of Problem Solving), doing practice competitions, and discussing solutions with my teammates. I've been very lucky to have coaches who were so dedicated to exposing young people like me to math.

I didn't really get involved with physics until I entered high school and joined the Science Bowl team. Even there, I almost didn't encounter physics. I had decided that I wasn't going to be like all the other stereotypical math people who only studied math and physics. I decided to learn chemistry instead. I wouldn't have been exposed to physics at all, except that by chance, it turned out that our team needed another person to study physics and I was encouraged to fill that role. So after several wrong turns, I finally picked up a physics textbook and began to learn this subject. And I am so glad for that accident.

Physics and I instantly got along excellently; it held all the challenge that interested me in hard math problems, and it was really cool too. I love struggling with difficult problems, whatever the type. But physics has an added benefit-all the cool things that you learn about in physics actually exist in the real world, and that makes them doubly awesome. There is a certain pleasure in figuring out the key to solving a complex problem and really understanding at the most fundamental level how something works. That's the spark that drives me to learn more physics for Science Bowl, the Physics Olympiad, but mostly just for my own pleasure.

I look forward to meeting everyone else going to physics camp in a couple of weeks. I hope to have lots of fun learning even more physics along with you and hopefully having time to play lots of Ultimate Frisbee with you as well.