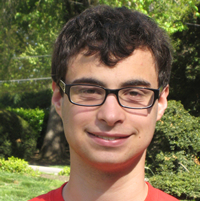 Pretty much as far back as I can remember, I have been interested in both science and math. And for most of that time, math was clearly my first choice. I remember my Dad and my Uncle Rob giving me 'farmer Dan' problems, which I now recognize as word problems. These taught me the basics of geometry and algebra, and helped me to see the practical applications of math. By the middle of sixth grade, I had a healthy understanding of complex numbers, a hazy idea of how a derivative worked, and was enjoying my school's MathCounts team (thanks Mrs. Manchester!).

A seminal moment occurred in sixth grade when we had been studying physics in class. I was at home. I was playing a video game where a rabbit jumps from one platform to another. My rabbit fell. Out of curiosity, I worked out whether the rabbit could have really fallen a hundred feet in the amount of time suggested by the game. It took a lot of work, but after a large amount of consulting with Wikipedia and other sources, I finally got an answer. Honestly, I doubt it was right. But it was a start.

From there, my fascination grew to encompass not only mechanics, but also the structure of the atom, the details of Coulomb interactions, and later statistical mechanics and quantum physics. I continued reading, both off the internet, and from books (you can get an awesome book at a huge discount from Amazon). In ninth grade, I took my first real physics course from Mr. Schafer who gave me access to his library. We worked out an informal one-question-a-class rule. Even better, he encouraged me to help other really bright students. I had a lot of fun helping some of my close friends understand the basics (well, the advanced basics) of electricity and mechanics. I continue to teach physics to this day in my school's Physics Team, also organized by the awesome Mr. Schafer.

And while I'm thanking people, many thanks to mom and dad for indulging my interests from trucks to dinosaurs to Bionicles. Thanks to Montgomery County for having an excellent magnet program to help me meet mathematically gifted and amazing friends, and for giving me dedicated teachers. Thanks to my friends who have made and will continue to make my life interesting and fun. Thanks to all of my teachers who helped me along the way. And thanks to the AAPT for inviting me to what I hope and expect to be a fantastic program.