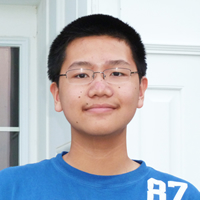 Science has always been part of my life. My parents instilled me and my brother with an interest of science at an early age by bringing us to all kinds of museums. I remember our trips to the Indianapolis Children's Museum, the Field Museum of Chicago, and the Pacific Science Center in Seattle and how they fascinated me with the magic of science. In middle school, I was encouraged to participate in MATHCOUNTS; that really gave me the math skills I would need to succeed in physics as well as the competitive academic spirit.

I was given the book Physics for Dummies in the summer before 8th grade, but frankly, a quick skim gave me the impression that physics was pretty repetitive and not very difficult. Luckily, by the next summer, I had forgotten about my first impression and began learning a more exciting and challenging AP Physics course at home. Then, physics seemed appealing and very natural to me.

The elegance of physics cannot be expressed in words. Equations can reveal some of its nature, but it seems impossible how everything just fits together so well. The physics demos also simply blow your mind. From gyroscopes to resonance to liquid nitrogen balloons to Portal (ha doesn't really count), physics can be simply astounding.

I would like to thank my family for their continuing support and motivation. My dad, with a Ph.D. in physics, has been a source of wisdom and guidance throughout my learning process. Also thanks to Mr. James, my physics teacher at Carmel High School who provided a funny and instructive course on AP Physics C. Finally, I am glad to have a great public education system, Carmel Clay Schools, in my town.